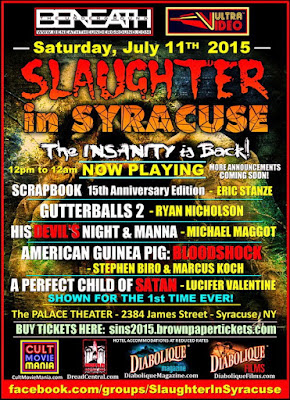 Here's a press release I received about a cool indie film fest coming to the Syracuse area in early July!

The 2nd annual Slaughter In Syracuse Independent Underground Film Festival is poised to the extreme to slay New York State with a three day event which reaches to the depths of independent underground film, from July 10th – July 12th 2015 .

Sins is the brainchild event of Jason West of Vultra Video & Nick DeCarlo of Beneath The Underground. SinS opens up Friday July 10th 2015 at 6:00pm at The Maplewood Inn with a special VIP meet & greet with directors and actors, plus exclusive screenings of AMERICAN GUINEA PIG: BOUQUET OF BLOOD & GUTS with director Stephen Biro and f/x maestro Marcus Koch, as well as REVENGE IS HER MIDDLE NAME with director Anthony Matthews. Producer Bryan Truex will be available for  some Q&A following the films.

Saturday July 11th, brings the Slaughter in Syracuse Independent Underground Horror Film Festival at the Palace Theater beginning at 11:30am with local Syracuse band “One Last Shot” opening the event. On Sunday July 12th, the excitement continues at the Maplewood Inn with the Slaughter In Syracuse Collector Con at 11:00 AM, featuring vendor booths with everything Horror and Sci-Fi related that any gorehound or sci-fi fan could want to search for.

The Slaughter In Syracuse Independent Underground Film Festival is an 18+ year of age event. Ticket and hotel info can be found at the bottom of this post.

THE COMPLETE LINEUP FOR THE SLAUGHTER IN SYRACUSE FILM FEST!

Arthur Cullipher and actor Shane Beasley will be doing a Q&A after the film.

THE WORLD PREMIERE OF “VOMIT FORE 4” & “A PERFECT CHILD OF SATAN”
Time: 7:50 PM
Directed by: Lucifer Valentine
The director will NOT be in attendance, but will participate in a Q&A following the event, via telephone.

The venue (i.e. The Palace Theater) for the July 11th SinS Film Festival is limited to 600 tickets. The VIP July 10th event is limited to 100 ticket sales. There are 3 VIP Levels, once any combination of 100 sales are made the VIP tickets will no longer be available.

All guest appearances are confirmed but subject to possible cancellation due to professional obligations and opportunities beyond the control of Slaughter In Syracuse and it's organizers. For more information, visit SlaughterinSyracuse.com, and/or the SinS Facebook Page.

Posted by The Vault Master at 2:11 AM