Hey Vault Dwellers! Sorry for the delay in updating all of you on last week's new DVDs, Blu-rays, and 4K discs! To make up for it, I'm going to do a double shot of STOCK YOUR VAULT today so, to quote Samuel L. Jackson in JURASSIC PARK (forgot he was in that, didn't you?): "Hold onto your butts!"

06 - 16 - 2020
Last week Paramount hit us with a steelbook of FRIDAY THE 13TH (which was just a repackage of the previous Blu-ray release), Severin unleashed their slightly delayed Blu-rays of HORRORS OF SPIDER ISLAND and SATAN'S SLAVE, and Dark Force Entertainment hit us with three new releases: CHAOS, THE GIANT SPIDER INVASION, and PRIMAL SCREAM!

THE MARSHES (a Shudder exclusive) arrived on DVD & Blu-ray disc, both BRAVEHEART and GLADIATOR made their 4K steelbook debuts, and Darkside Releasing unveiled DEADLY CRUSH and HYDE'S SECRET NIGHTMARE.

But Scream Factory won the week with their new UNIVERSAL HORROR COLLECTION: VOLUME 5 (which contains four classic fright flicks from the Universal vaults!) and their stellar Blu-ray of THE HILLS RUN RED, which is loaded with hours of new extras and multiple new audio commentary tracks! Fans of this indie slasher NEED this disc!

The rest of last week's release roster was made up of a variety of oddball DVD titles - scroll down to see them all (and continue on to this week's list of new releases)!

06 - 23 - 2020
Ah, here we go! Back on track! Welcome to the current week fellow film collectors! If you thought last week's slate of new DVDs, Blu-rays, and 4K Ultra HD discs was disappointing, well I have news for you: This week is way worse! But on the plus side, it looks like we'll all be saving some money!

Scream Factory's lone new release this week is Bert I. Gordon's THE SPIDER (aka EARTH VS. THE SPIDER), Arrow Academy brings THE MAD FOX to Blu-ray for the first time, and Kino Lorber Studio Classics delivers multiple new titles, including THE LAST VALLEY (featuring a very young Michael Caine), a Special Edition Blu of MURDER BY DECREE, and CARAVANS (featuring Christopher Lee)!

The Warner Archive Collection brings the Vincent Price classic HOUSE OF WAX 3D back into print, but this week I'm giving the glory to Arrow Video's new Blu-ray release of DREAM DEMON. This film has been out of print for a very long time, and has received the royal treatment from the fine folks at Arrow! This disc contains two cuts of the film, a new 2K restoration, new audio commentary, a ton of new cast & crew interviews, a new making-of documentary, and MORE!

There really isn't much else to get excited for this week Vault Dwellers - scroll down to see the paltry list of new releases if you dare!


NEW TO DVD
For We Are Many
A Good Woman is Hard to Find
The Haunted
Immaculate Possession
Inheritance (Lionsgate)
The Legion (Paramount)
The Son of Dr. Jekyll (Rogue Video)
Wood Witch

Posted by The Vault Master at 1:44 AM 0 comments

You Will Utter a PRIMAL SCREAM During the CHAOS of THE GIANT SPIDER INVASION! 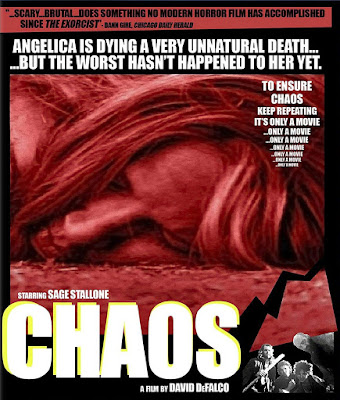 I'm more or less interested in two of these new Dark Force Entertainment releases Vault Dwellers: THE GIANT SPIDER INVASION (which was released on Blu-ray by VCI years ago and loaded with cool extras... that aren't on this release) and PRIMAL SCREAM, which is making its Blu-ray debut! As for CHAOS (which is based on "an original idea" by David DeFalco and Steven Jay Bernheim. HA!)... I already own LAST HOUSE ON THE LEFT so I don't really need this pale imitation of Wes Craven's notorious film.

If any of these three titles have managed to pique your curiosity, then please continue onward to learn more about this trio of new Dark Force Entertainment Blu-rays fellow collectors of physical media!

Synopsis: Based upon "an original idea" from writer/director David DeFalco, CHAOS (which features the late Sage Stallone) follows two teenage girls on a mission to find drugs at a rave get more than they bargained for. One is sexually assaulted and they are both tortured in horrific ways. The attackers seek refuge in the home of one of the victims' parents, leading to a violent chain of events.

Extras:
CHAOS is now available wherever Blu-ray discs are sold, and should cost approximately $18.00! If a cheap knock-off of LAST HOUSE ON THE LEFT sounds like a good time, pick up a copy today from AMAZON, BULL MOOSE, or directly from the DARK FORCE SUPERSTORE! 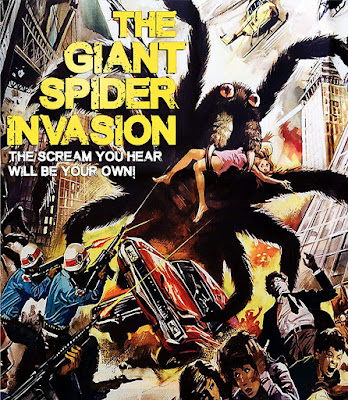 Synopsis: After a black hole strikes, it opens up another dimension in a rural Wisconsin town, and soon there is an invasion of gigantic arachnids who crave human flesh. NASA scientists Dr. Vance (Steve Brodie - THE WIZARD OF SPEED AND TIME) and Dr. Jenny Langer (Barbara Hale) try their best to save humanity as a romance blooms between them. Meanwhile, local Dan Kester (Robert Easton - THE TOUCH OF SATAN) squabbles with his wife, Ev (Leslie Parrish), and has a dalliance with local bartender Helga (Christiane Schmidtmer).

Extras:
While it may have a better transfer than VCI's previous release (which was featured in the original 1.85:1 aspect ratio), Dark Force's disc lacks the great extras that populated VCI's 3-disc release! But seeing as how that set is currently out of print, this disc is the only way to watch Bill Rebane's notorious feature film, which had the distinct honor of appearing on one of the funniest episodes of Mystery Science Theater 3000! THE GIANT SPIDER INVASION costs between $18 - $22, and can be obtained from AMAZON, BULL MOOSE, or DIABOLIK DVD! 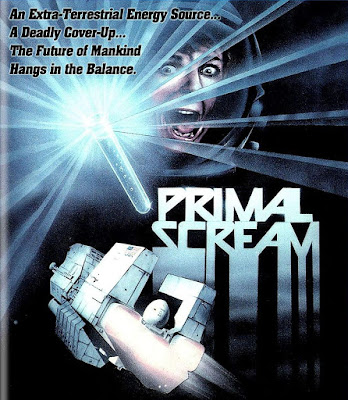 Synopsis: The year is 1993. Earth's fuel sources are rapidly decaying. A recently established top-secret government project regarding the deep space mining of a revolutionary new energy source is under way- independently financed and protected at any cost by a mysterious corporation who motives may not be as pure as the gullible public is lead to believe.

Code named: HELLFIRE, this new energy source in its stable form is 100% manageable - no fallout, no acid rain, no ill effects. In its unstable form, however, HELLFIRE is capable of igniting human flesh and completely disintegrating the body.

After underground protests its use result in the brutal murder of a high ranking corporate executive, the corporation's own motives come under investigation. And Corby McHale is caught right in the middle... Up against the rich and ruthless whose power has no limit and who will do anything to protect their deadly secret. The closer McHale gets to the solution, the deadlier the game becomes!

Extras:
PRIMAL SCREAM arrives on Blu-ray for the first time from Dark Force Entertainment and should cost between $18 - $20! If you like films featuring evil corporations, coverups, and spontaneously combusting victims, then pick up a copy of PRIMAL SCREAM today from AMAZON, BULL MOOSE, DIABOLIK DVD, or directly from THE DARK FORCE SUPERSTORE!

Hey Vault Dwellers! As I stated last week, June is NOT a great month for new releases, and will  be pretty light overall. Just look at this week's release slate for proof! That being said, this week's thin release roster actually contains a few hidden gems.

The controversial Universal/Blumhouse film THE HUNT is now available on DVD & Blu-ray disc, as are WE SUMMON THE DARKNESS, and THE DINNER PARTY.

Kino Lorber dropped their third FILM NOIR: THE DARK SIDE OF CINEMA collection, and Mill Creek floods the home video market with various new titles, including the highly anticipated double feature of THE H-MAN & BATTLE IN OUTER SPACE, plus two 10-Film DVD sets (SWEATING BULLETS and A DEADLY PLACE).

But this week's champ is hands-down Severin Films. Along with DVD releases of THE STRANGE VICE OF MRS. WARDH and CARNIVAL MAGIC, Severin finally unleashed their impressive AL ADAMSON: THE MASTERPIECE COLLECTION boxed set. Featuring thirty-two films and a slew of extras, this is likely the definitive release for the (almost) entirety of the late exploitation filmmakers' directorial career!

There's honestly not much else worth mentioning this week gang (just a bunch of direct-to-DVD junk and anime), but if you want to see the full roster, just scroll on down!


NEW TO DVD & BLU-RAY
The Dinner Party
Doctor Who: The Complete Twelfth Series
The Hunt
We Summon the Darkness

Posted by The Vault Master at 1:02 AM 0 comments

The Most Controversial Film of the Year is Here: THE HUNT is Now Available on DVD & Blu-ray! 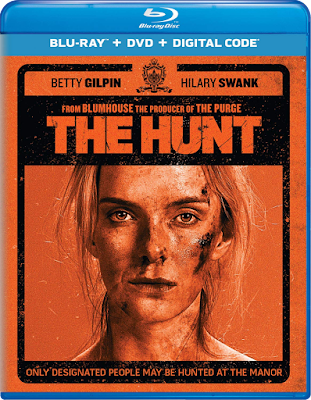 HUNTING HUMANS IS ALL THE RAGE IN THIS (NOT-SO) POLITICALLY CHARGED THRILLER FROM BLUMHOUSE PRODUCTIONS!

I remember all the hoopla when the first trailers for THE HUNT hit the web, and I for one was more than ready to scope out this darkly humorous contemporary version of THE MOST DANGEROUS GAME. Surprisingly the film was shelved due to outrage caused by its perceived anti-conservative bent (which apparently isn't the case), and didn't get released in theaters until March of this year.

And then the global pandemic happened, theater chains shut down, and the film just didn't have enough time to find its audience. But now that THE HUNT is available on DVD & Blu-ray disc, those of us that missed it on the big screen can finally give it a look (if we haven't already rented it digitally that is)!

Synopsis: In this subversive satire, a group of elites gather for the very first time at a remote Manor House to hunt ordinary Americans for sport. But the elites' master plan is about to be derailed because one of The Hunted, Crystal (Betty Gilpin, Glow), knows The Hunters' game better than they do. She turns the tables on the killers, picking them off one by one as she makes her way toward the mysterious woman (two-time Oscar® winner Hilary Swank) at the center of it all.

Extras:
THE HUNT is now available on Blu-ray (and DVD), and should cost between $22 - $23!  You can order yourself a copy right now from either AMAZON or BULL MOOSE!

Welcome to June 2020 Vault Dwellers! Believe it or not, this month is going to be relatively light on new DVD, Blu-ray, and 4K Ultra HD titles! That being said, there will still be multiple new releases that are going to make your collective mouths water, and this week is no exception!

Scream Factory's only new title this week is WITCHES IN THE WOODS, their parent company Shout! Factory released TOKYO GODFATHERS and THE BLACKOUT: INVASION EARTH, and Severin Films' slightly delayed THE STRANGE VICE OF MRS. WARDH has finally arrived on Blu-ray disc!

Kino Lorber Studio Classics released LET'S KILL UNCLE and THEY CAME FROM BEYOND SPACE to DVD & Blu, Shudder's ONE CUT OF THE DEAD and first season of CREEPSHOW: THE SERIES are both readily available from most online retailers, as is Dark Sky Films' 1BR.

For those of you who dabble in collecting imports, there are several new titles worth mentioning: Powerhouse's Indicator label out of the UK just dropped new Region Free Blu-rays of NIGHT TIDE and SEE NO EVIL, while Australia's new [Imprint] label dropped stellar new Blus of I MARRIED A MONSTER FROM OUTER SPACE and the original THE WAR OF THE WORLDS (which is coming to the U.S. via Criterion in July)!

But the big title this week has to be Universal's new 45th Anniversary Limited Edition 4K Ultra HD Blu-ray of Steven Spielberg's JAWS! Along with new packaging (which comes with a 44-page booklet and lenticular cover), the disc contains all of the previous extras from Univeral's previous Blu-ray release, and promises the best picture and audio presentation of this classic film yet!

There are still quite a few DVDs, Blu-rays, and 4K discs I didn't mention, so be sure to scroll down to see the full list of new releases!

Posted by The Vault Master at 1:55 AM 0 comments