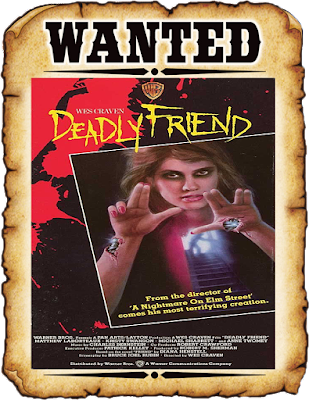 My memories are a bit fuzzy when it comes to Wes Craven's DEADLY FRIEND, but I remember catching it on cable when I was fairly young. I recall sneaking downstairs to the living room late at night to watch something on the "big TV," but I'm not sure if this film was the reason for that. Regardless, I was excited to be watching DEADLY FRIEND because at that time I was a fledgling Horror fan that had discovered various other Craven films including SWAMP THING, THE PEOPLE UNDER THE STAIRS, and SHOCKER. (Thank you TNT's MonsterVision!)

Looking back, I didn't find DEADLY FRIEND particularly scary, but I do recollect being absolutely floored when Anne Ramsey's head exploded during the film's notorious "death by basketball" scene, and becoming smitten with Kristy Swanson. Oddly enough, my most vivid memory of watching this movie for the first (and now that I think of it, last) time was my reaction at the end: I wept. In retrospect I'm not really sure why, but I guess it was because I thought it was really sad that the lead character lost everyone close to him despite his best intentions? Maybe? I don't exactly know.

What I do know is that we are nearing the 35th anniversary of DEADLY FRIEND's theatrical release (October 10th) and Wes Craven's troubled production still has yet to make the leap to Blu-ray disc! But I have a strong feeling that will change sooner rather than later, seeing as how this title has garnered a decent cult following over the past three decades. And with all of the boutique labels raiding studio vaults these days, it's only a matter of time before DEADLY FRIEND finally gets an upgrade!

Synopsis: Based upon Diana Henstell's novel Friend, DEADLY FRIEND focuses on teenage science whiz Paul Conway (Little House on the Prairie's Matthew Labyorteaux). He and his mother (and his overprotective robotic creation B.B.) move to a new neighborhood, where he befriends the pretty girl next door, Samantha Pringle (Kristy Swanson). The two teens rapidly become close, until a series of unfortunate events occur: B.B. is gunned down by Elvira, the cranky/crazy basketball-stealing old woman that lives across the street (portrayed by Mama Fratelli herself, Anne Ramsey) and Samantha is thrown down a flight of stairs by her abusive father.
Unable to deal with losing the girl he loves, Paul swipes Samantha's comatose body from the hospital (before she's taken off of life support) and installs B.B.'s microchip into her brain. This somehow resuscitates Samantha, who acts oddly robotic (because B.B. is apparently in the driver's seat) and is eager to dole out some punishment to those that have wronged her. After murdering Poppa Pringle (Harry Marcus) exploding Elvira's skull with a basketball, and tossing a bully to his death, Paul's cyborg construct begins showing signs of regaining her humanity. But it's too little too late, and this dark love story builds to tragic end for both of its main characters.
Availability: After bombing at the box office, DEADLY FRIEND came to VHS in January of 1994 where it started to build a following. After VHS died off, the film would then be released to DVD in September of 2007, then in a 4-Film set with SOMEONE'S WATCHING ME!, EYES OF A STRANGER, and THE HAND in 2012. There was also a reissued standalone DVD release in 2020. The movie is also available to stream instantly on Amazon Prime Video. There's also a region free Spanish Blu-ray that may or may not be a bootleg.

Current Rights Holder: Warner Bros., so there is a slight chance that DEADLY FRIEND could become part of the Warner Archive Collection at some point! However, if I was a betting man I'd put my money on Scream Factory, seeing as how they've released SOMEONE'S WATCHING ME!, EYES OF A STRANGER, and THE HAND on Blu-ray already. Fingers crossed!

Blu-ray Wishlist:
DEADLY FRIEND was Wes Craven's first studio film, and he shot it during a particularly rough patch in his life: His marriage was ending, he was booted from directing both BEETLEJUICE and SUPERMAN IV (in retrospect, the latter wasn't such a bad thing), and became embroiled in a baseless lawsuit. Even with all that going on in his life, Wes so badly wanted to direct a non-Horror film which is why he leaped at the chance to bring FRIEND (formerly ARTIFICIAL INTELLIGENCE, A.I., and eventually DEADLY FRIEND) to the big screen.

But his original vision never had a chance. Wes added a gory nightmare-sequence to the film at the behest of producers, which got great reactions during a test screening. After that, Wes was told to add more blood and guts to the film, and to replace his ending with one that was conceived by Mark Canton, the then President of Warner Bros. Then, after committing to upping the film's body count, Craven had to battle his old nemesis the MPAA, which saddled DEADLY FRIEND with an X-rating until numerous cuts were made. (Yeesh.... what an absolute nightmare the entire ordeal must have been for Wes.)

Back in April 2014, fans of the film started a petition at Change.org (which has sadly only garnered 100 signatures) in an attempt to convince Warner Bros. to release a director's cut. Needless to say, it didn't do the trick. So here's my plea to the powers that be at the WB (and Scream Factory... perhaps?): Please breathe new life into this film! Delivering a director's cut is likely a tall order, so even if you just do a high-def restoration of the theatrical cut with some decent bonus features, I think fans will be somewhat sated. And if you won't do it for the people who adore it, then at least do it to honor the memory of Wes Craven and let his spirit rest a bit more easily. The ball's in your court Warner Bros.

For a more in-depth look what went on behind the scenes during the making of DEADLY FRIEND, I highly recommend the following video from JoBlo.com:

Posted by The Vault Master at 6:31 PM 0 comments