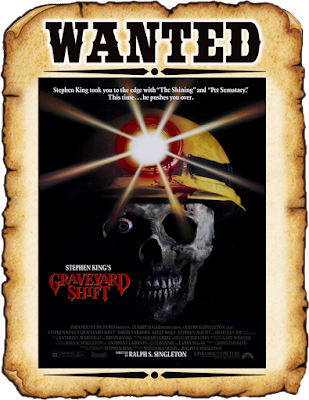 When I was growing up in my hometown of Scranton, PA between the late 80s / early 90s, there was an awesome mom & pop video store minutes away from the house called Electric City Video. With a cool sign (featuring neon pink lettering), its pleasant "video store smell" (a unique scent that can never be replicated), and impressive collection of Horror and Sci-Fi films on VHS. Sigh... it truly was heaven.

I always made sure to peruse the covers for the films that I wasn't allowed to watch, and how could I not? VHS covers were a definite art form, and beautifully designed to entice you to rent a movie. There were so many memorable VHS covers, but one that frequently caught my eye was Stephen King's GRAVEYARD SHIFT. The cyclopean skull with the bloody hardhat always drew me in.

I wouldn't actually get to see GRAVEYARD SHIFT until I was a teenager, when my uncle (a huge King fan that has since passed away) allowed me to borrow his VHS copy. While it didn't quite catch on with me then, I have since become a fan of this Stephen King adaptation, which is loosely based upon his short story of the same name. (It's one of the many tales contained in Night Shift!) With the upcoming theatrical release of DOCTOR SLEEP in November, plus the impending Blu-ray releases of THE SHINING (on 4K UHD), THE STAND (restored!), and SILVER BULLET (Collector's Edition!), I figure it's only a matter of time before GRAVEYARD SHIFT gets a physical media upgrade!

Synopsis: A drifter named John Hall (David Andrews - CHERRY 2000, FIGHT CLUB) gets hired at a rat-infested textile mill in Maine, that is run by an unhinged foreman named Warwick (Stephen Macht - THE MONSTER SQUAD, NIGHTWING). When asked to clean out the basement to make room for more office space, Hall and various other employees venture into the depths of the mill with Warwick, only to discover that rats aren't the only thing nesting beneath the ancient structure!


GRAVEYARD SHIFT also stars Andrew Divoff (WISHMASTER), Kelly Wolf (Tales From the Darkside), Brad Dourif (the voice of Chucky in the CHILD'S PLAY series), and Vic Polizos (C.H.U.D., NIGHT OF THE CREEPS, HARLEM NIGHTS), and features a team of special effects artists that are still actively working in Hollywood to this day! As far as book-to-film adaptions go, GRAVEYARD SHIFT is fairly accurate but makes some major changes in its third act, most likely due to budget constraints.

GRAVEYARD SHIFT is sole directorial effort of Ralph Singleton, who has spent most of his career producing films, including both PET SEMATARY movies and a pair of Eddie Murphy classics. His movie is a cool creature feature with a great cast, that totally embraces its own weirdness and absurdity. (In particular, that end credits "theme song" is SO bizarre!) By now, it surely has a large enough cult following to warrant an HD overhaul!

Availability: GRAVEYARD SHIFT is readily available on DVD and digital and super cheap to boot!

Current Rights Holder: This is an easy one for a change Vault Dwellers - Paramount owns the rights to GRAVEYARD SHIFT! And seeing as how Scream Factory has been dipping into the Paramount vaults as of late, I would not be shocked if they gave this movie its big Blu-ray debut!


Blu-ray Wishlist:
GRAVEYARD SHIFT's 30th Anniversary is next October, and I can't think of a better birthday gift for the film, than a nice Collector's Edition release! The movie pretty much broke even during its initial theatrical run, but I'm certain it quietly found an audience on VHS and late night cable TV since then. And hopefully somebody out there (cough, Scream Factory, cough) can find it in their heart to finally bring this oft-overlooked Stephen King fright flick to Blu-ray disc!