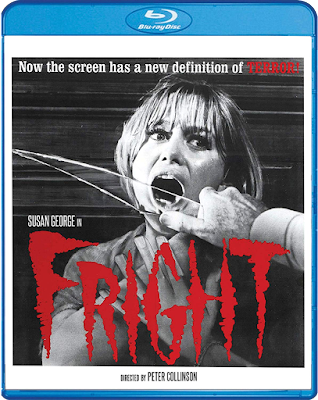 Chalk up two more Scream Factory titles that I need to check out. FRIGHT's plot sounds suspiciously familiar, as it revolves around a babysitter under assault by an escaped mental patient (cough, HALLOWEEN, cough). As for STRAIGHT ON TILL MORNING, I was hoping that it was some sort of crazy Peter Pan-themed fright flick, but instead it seems like it's more of a bizarre love story between a young woman and a gigolo/serial killer. Either way, both films have garnered my interest, and I'd love to add them to my always growing Scream Factory collection. If you're as unfamiliar with these two movies as I am, continue reading to sate your curiosity!

Synopsis: Teenage babysitter Amanda (Susan George - STRAW DOGS, TINTORERA) arrives at the Lloyd home to watch their young son for the evening. But it seems that the strangely nervous Mrs. Lloyd is hiding a shocking secret ... a secret that has just escaped from a nearby insane asylum and is now desperately trying to get inside the house. What must Amanda endure to survive the ultimate night of Fright?

Extras:
FRIGHT (aka I'M ALONE AND SCARED) comes to Blu-ray on Tuesday, September 17th and should cost around $22! Add it to your collection today by ordering it from AMAZON, BULL MOOSE, DIABOLIK DVD, or directly from SHOUT! FACTORY. 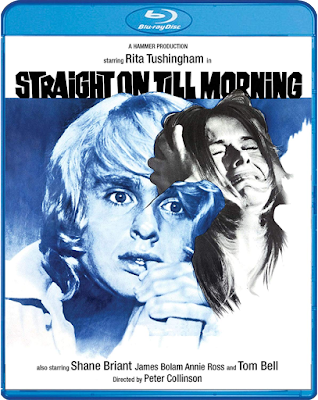 Synopsis: An ugly duckling yearns to leave her drab Liverpool life and move to swinging London to find her Prince Charming. But the big city holds some nasty surprises for the naïve young woman when she becomes obsessed with a handsome gigolo who may be a depraved serial killer!

Rita Tushingham (A TASTE OF HONEY) and Shane Briant (DEMONS OF THE MIND, CAPTAIN KRONOS: VAMPIRE HUNTER) star in this 1972 psycho-sexual thriller directed by Peter Collinson (FRIGHT, THE ITALIAN JOB).

Extras:
STRAIGHT ON TILL MORNING makes its North American Blu-ray debut on September 17th and should cost around $22! Get your copy of this oft-overlooked Hammer title now from AMAZON, BULL MOOSE, DIABOLIK DVD, or directly from SHOUT! FACTORY.