It's been a long time since I've posted about new Umbrella releases - far too long. So let me make up for lost time by introducing you to their latest DVD & Blu-ray releases!

Follow Matt Dillon's evolution as a serial murderer in the (fully uncut) THE HOUSE THAT JACK BUILT, and discover that yes, Eric Roberts will star in anything when you watch IMMORTAL WARS: RESURGENCE! Also enjoy a fun double feature of LAST ACTION HERO with Arnold Schwarzenegger, and HUDSON HAWK featuring Bruce Willis back when he could still crack a smile. Watch a modern retelling of a Greek epic in ULYSSES: A DARK ODYSSEY, see what's lurking UNDER THE SILVER LAKE, and travel across the Outback with WILLS AND BURKE, which features a young Nicole Kidman!

ANNOUNCEMENTS:
* On October 2nd, Umbrella Entertainment is releasing two fun-looking Horror titles to DVD! Rolfe Kanefsky (THERE'S NOTHING OUT THERE) directs ART OF THE DEAD, which features seven evil paintings representing the seven deadly sins! Will a half-blind priest save an art-collecting couple from a demonic fate? Also coming to DVD is the FIELD GUIDE TO EVIL, an anthology flick from the creators of THE ABC'S OF DEATH featuring 8 international folktales of terror!

* Also due out on October 2nd is the new sci-fi thriller THE WHEEL, in which a paraplegic prison inmate volunteers for an experimental procedure that may allow him to walk again. However, this bargain does come with a few strings attached. Stars Jackson Gallagher, David Arquette, and Kendal Rae! 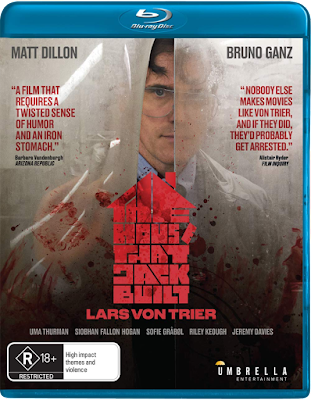 Synopsis: USA in the 1970s. We follow the highly intelligent Jack (Matt Dillon - CRASH) over a span of 12 years and are introduced to the murders that define Jack's development as a serial killer. We experience the story from Jack's point of view, while he postulates each murder is an artwork in itself. As the inevitable police intervention is drawing nearer, he is taking greater and greater risks in his attempt to create the ultimate artwork.

Along the way we experience Jack's descriptions of his personal condition, problems and thoughts through a recurring conversation with the unknown Verge (Bruno Ganz - DOWNFALL) - a grotesque mixture of sophistry mixed with an almost childlike self-pity and psychopathic explanations. THE HOUSE THAT JACK BUILT is a dark and sinister story, yet presented through a philosophical and occasional humorous tale. (Note: This is the complete Director's Cut of the film!)

ORDER "THE HOUSE THAT JACK BUILT" ON BLU-RAY FROM AMAZON.COM OR UMBRELLA ENTERTAINMENT! 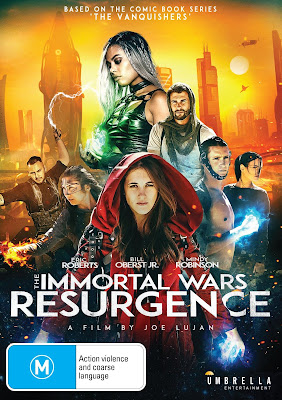 Synopsis: In this sequel to THE IMMORTAL WARS, the war for freedom has just begun. Trikalypse joins forces with rebel leader Kalera and her team of freedom fighters. They must now fight back to bring Dominion (Eric Roberts - THE DARK KNIGHT, THE EXPENDABLES, CHILLERAMA) down and expose him to the world!

ORDER "THE IMMORTAL WARS: RESURGENCE" ON DVD FROM AMAZON.COM OR UMBRELLA ENTERTAINMENT! 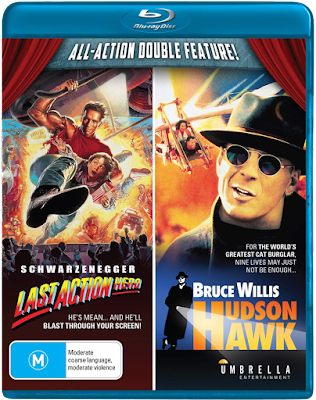 One of Slater's enemies, Benedict the hitman (Charles Dance - THE GOLDEN CHILD, PATRICK), gets hold of the ticket and ends up in Danny's world, where he realizes that if he can kill him, Slater will be no more. Slater and Danny must travel back and stop him.

In HUDSON HAWK, Bruce Willis (the DIE HARD series) is Eddie "The Hawk" Hawkins, the world's most famous cat burglar. After 10 years in prison, he's ready to go straight. But it's not going to be easy for The Hawk...The mob and the CIA have conspired to blackmail Eddie and his partner, Tommy Five-Tone (Danny Aiello - LEON: THE PROFESSIONAL), into stealing three DaVinci masterpieces from the most heavily-guarded museums in the world. Sounds simple, right? WRONG!

While trying to steal the goods Hawk falls in love with a beautiful nun (Andi McDowell - FOUR WEDDINGS AND A FUNERAL, MULTIPLICITY) and is relentlessly pursued by the greedy and powerful Minerva and Darwin Mayflower, who want the artworks as part of their twisted plot to ruin the world's economy. It's wall-to-wall action as the wise-cracking Hawk saves the world, wins the girl and gets the last laugh. 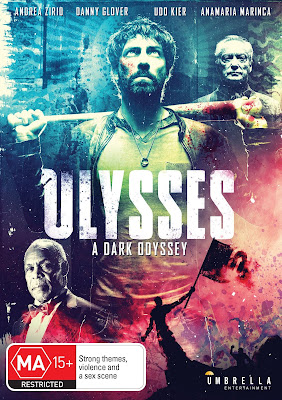 Synopsis: A military man returns from Middle‐East carrying the signs of war both on his body and in his soul. He tries to forget seeking refuge in the use of drugs. After being imprisoned for seven years in a remote place, he escapes and returns back home, where he discovers that his wife Penelope is being kept by Mr. Ocean, the underworld boss of Taurus City. Supported by Niko, they start a journey of discovery within a single night.

Fearing the disappearance of his wife is related with underworld characters, Ulysses and Niko set out to find her. They meet surreal and disturbing figures: the violent and bloody kebab store owner Pòpov, the drug dealer Aeo, “God of the winds”, the enigmatic and beautiful transsexual Hermes, the charming mistress Cici, the Seer who knows Ulysses’ story and tells him he has a son, the seductive Kaly and finally Alcyde whom, having heard to his story, decides to help him.

ORDER "ULYSSES: A DARK ODYSSEY" ON DVD FROM AMAZON.COM OR UMBRELLA ENTERTAINMENT! 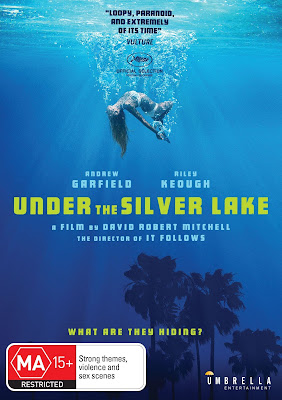 Synopsis: From the dazzling imagination that brought you IT FOLLOWS and THE MYTH OF THE AMERICAN SLEEPOVER, comes a delirious neo-noir thriller about one man’s search for the truth behind the mysterious crimes, murders, and disappearances in his East L.A. neighborhood.

Sam (Andrew Garfield) is a disenchanted 33 year old who discovers a mysterious woman, Sarah (Riley Keough), frolicking in his apartment’s swimming pool. When she vanishes, Sam embarks on a surreal quest across Los Angeles to decode the secret behind her disappearance, leading him into the murkiest depths of mystery, scandal, and conspiracy in the City of Angels.

Mining a noir tradition extending from KISS ME DEADLY and THE LONG GOODBYE
to CHINATOWN and MULHOLLAND DRIVE, Mitchell uses the topography of Los Angeles as a backdrop for a deeper exploration into the hidden meaning and secret codes buried within the things we love.

ORDER "UNDER THE SILVER LAKE" ON DVD FROM AMAZON.COM OR UMBRELLA ENTERTAINMENT! 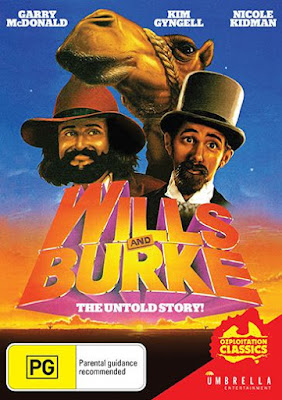 ORDER "WILLS AND BURKE" ON DVD FROM UMBRELLA ENTERTAINMENT!

Posted by The Vault Master at 3:14 AM