Now Available on DVD: It's Rebels Vs. Religion Vs. Zombies in Israel Luna's DEAD DON'T DIE IN DALLAS! 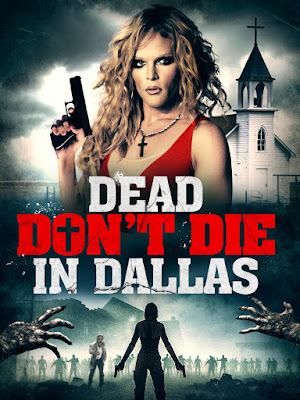 DEAD DON'T DIE IN DALLAS' long journey toward distribution is finally over! Shot across various cities in Texas over the course seventeen days back in 2013, the film was originally titled KICKING ZOMBIE ASS FOR JESUS and was stuck in limbo until its completion in 2017. And now, after six years (!!!) Israel Luna's long-awaited companion piece to his 2010 cult classic, TICKED-OFF TRANNIES WITH KNIVES has finally arrived on DVD!

Synopsis: After a miracle pill intended to cure all infectious diseases, turns the people who took it into flesh-craving mutant zombies, transgender hairdresser Beth-Anne Fetterman (Willam Belli - A STAR IS BORN) battles for survival against a transphobic preacher in post-apocalyptic West Texas!

Additional Info: An openly gay filmmaker, Israel Luna made the film as a creative response to the homophobic and transphobic messages made by religious people over time. While covering religion and other topics, Israel says the film isn’t “pro-gay” or “anti-religion” and that it’s a movie for everyone.

Along with William Belli, DEAD DON'T DIE IN TEXAS also stars Krystal Summers (TICKED-OFF TRANNIES WITH KNIVES), Richard Curtain (FRIGHT FLICK), Tom Zembrod (FROM THE DARK), Adam Kitchen (The Ex-Box), and introducing Angel Martinez as Philomena the “tough-as-nails lesbian with a shotgun.” (Martinez who at the time was lesbian has since transitioned into a male.)

Extras:
DEAD DON'T DIE IN TEXAS just arrived on DVD from Mill Creek Entertainment and should cost between $18 - $30. You can pick it up now from AMAZON, BULL MOOSE, or directly from MILL CREEK ENTERTAINMENT. If that's a bit too rich for your blood, but you still want to see this film (and support indie film in the process) Luna's zombie epic is also available to rent or buy digitally at AMAZON!