THE STAND TV Mini-Series Arrives on Blu-ray on September 24th! 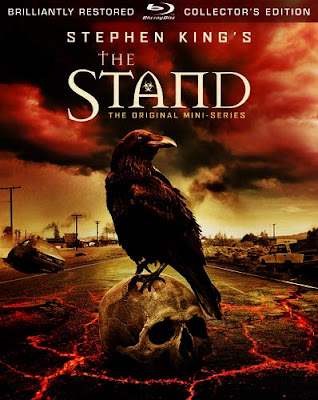 OWN THE SIX-HOUR TV MINI-SERIES OF STEPHEN KING'S EPIC TALE OF GOOD VS. EVIL, NOW FULLY RESTORED IN HIGH-DEFINITION!

Seeing as how today is Stephen King's 72nd birthday, I felt it was worth mentioning this upcoming release from Paramount Pictures! I remember watching THE STAND when I was a kid - it was all everyone was talking about. My parents were glued to the TV. I was glued to the TV. And shortly after the final chapter aired, I was flipping the pages of King's novel. And now, twenty-five years later, the mini-series is getting a new lease on life for an entirely new generation of King fans!

Synopsis: In Stephen King's epic vision of an apocalyptic future, the few survivors of a plague-ravaged world must choose sides in the ultimate battle of good vs. evil that will decide the fate of humanity. As the followers of demonic Randall Flagg plot to rebuild the world in his dark image, a courageous foursome embarks on a heroic mission against Flagg and his minions. Fighting overwhelming odds, they will risk more than their lives as they take one desperate last stand against evil.

Extras:
Though the few extras included were ported over from previous DVD releases, the restoration of the mini-series is worth the $22 - $32 pricetag alone. I've seen screencaps comparing the standard DVD release and the new HD restoration, and it's like night and day! Though the film looks colder (i.e. bluer) than it used to, the clarity is pretty remarkable. However, I should note that the back of the Blu-ray cover mentions that this version of THE STAND contains "enhanced effects," so that may be an issue for purists. Stephen King's THE STAND will be available on Tuesday, September 24th - order your copy today from AMAZON, BULL MOOSE, or DIABOLIK DVD!