This October, Enter 100 ACRES OF HELL! 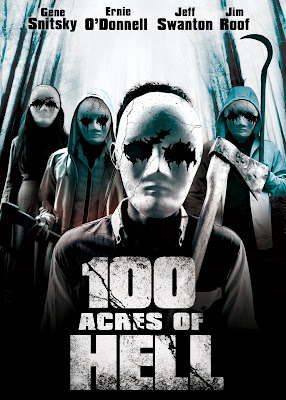 Proving that the inbred killer hillbilly sub-genre will never die, 100 ACRES OF HELL debuts in early October. Featuring two former WWE wrestlers (Gene Snisky and Sam "The Great Samu" Anoai), this new slasher flick is getting both a (limited) theatrical run, and DVD & VOD release in the near future! Horror fans will not want to miss this brutal matchup, between two of the WWE’s greatest icons!

Synopsis: After suffering a career ending injury and family tragedy Wrestling Champ, Buck Severs (Snisky) travels to an abandoned wildlife preserve with his friends for a 'Bro's Weekend.' They become the targets of a deadly manhunt and Buck must find the warrior in himself to fight the psycho, inbred mutant killer (Sam Anoai) that stalks through the preserve.


100 ACRES OF HELL opens in select theaters on Tuesday, October 8th, and will premiere on both DVD & VOD the following Tuesday (Oct. 15th). For more information about the film visit its Facebook Page and Official Website. Stay tuned for further updates.

Posted by The Vault Master at 2:03 PM