Duel of the Phantasms: A comparison between the two upcoming Phantasm Boxed Sets! 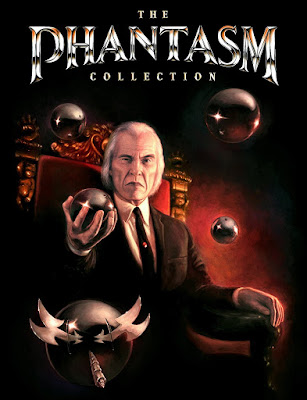 WELL GO USA AND ARROW VIDEO DUKE IT OUT WITH THEIR OWN UNIQUE PHANTASM BLU-RAY SETS IN APRIL 2017!

First off, I never thought I'd see a complete PHANTASM boxed set in any format! And now I'm talking about two distinctly different ones from two separate companies! How crazy is that? But which one should Phans purchase?

Well, that's entirely up to your price-range, and if you own a region free Blu-ray player. Well Go USA's set has the dual benefits of being Region A locked, and cheaper than the Arrow set. However, presentation is everything, and the Arrow release blows Well Go USA's set out of the water in that respect.

But I'm totally jumping the shark here, so let's stop for a moment and take a closer look at both releases, and see if we can come to a final conclusion.

Both sets (I'm assuming) have utilized the same exact masters, so this important decision (for Phans) is going to come down to the special features and the packaging. And that may even change as both companies have said that more extras will be announced as we get closer to their respective release dates. For now though, let's do a quick comparison utilizing the information we have so far.

PHANTASM: REMASTERED
Synopsis: At a funeral, Mike (A. Michael Baldwin), watches as a tall mortician clad in black (Angus Scrimm) tosses the unburied coffin into a waiting hearse as if it were nothing. Seeking the truth behind this unusual sight, Mike breaks into the mortuary, where he comes face-to-face with the sinister Tall Man. After barely managing to escape with his life, Mike enlists the help of his brother, Jody (Bill Thornbury), and their friend Reggie (Reggie Bannister). Together they set out to uncover the secrets of the Tall Man and those who dwell in his hellish world.

Arrow Video Extras:
Hmmm.... tough call here Vault Dwellers, because both discs are similar. Well Go USA's release boasts an intro by Angus Scrimm, a Fangoria TV Spot, and a "Graveyard Carz" featurette. However, Arrow Video tops that with an all new featurette about the making of the original PHANTASM, plus a groovy audience reaction track! I think I have to give Arrow the edge on this one gang!

PHANTASM II
Synopsis: Released after seven years in a mental hospital, Mike convinces his old pal Reggie to join forces with him to hunt down and destroy the Tall Man once and for all. Mike’s visions lead the two to a quiet little town where a horde of flying killer balls aim to slice and dice their gruesome way through everyone. Exploding with special effects, unparalleled thrills, horror and suspense, PHANTASM II climaxes with a blood-curdling conclusion that you have to see to believe.

Arrow Video Extras:
Though Arrow's PHANTASM II disc has a new featurette, and a few cool archival extras, it is sadly lacking the deleted and workprint scenes, and documentary that are included on Well Go USA's release. Point goes to Well Go USA.

PHANTASM III: LORD OF THE DEAD
Synopsis: The mutant dwarf creatures are attacking, the silver spheres are flying, and the Tall Man is back with a vengeance! Fifteen years after the original horror classic, writer/producer/director Don Coscarelli reunites brothers Mike (A. Michael Baldwin) and Jody (Bill Thornbury) to help their friend Reggie (Reggie Bannister) destroy the Tall Man (Angus Scrimm) once and for all.

Arrow Video Extras:
Another tough call here fellow phans. Both releases have similar special features, so I'm leaning towards a tie on this disc, if only because I don't know how in-depth Well Go USA's behind the scenes featurette is.

PHANTASM: OBLIVION
Synopsis: 13 years after the original nightmare began, Mike must cross dark dimensions of time and space to discover his origins and those of his nemesis, the evil Tall Man. With only his loyal friend Reggie at his side, and the spirit of his dead brother to guide him, Mike must finally confront this malevolent embodiment of death. Prepare to be scared witless as the fine line between the living and the dead snaps with a vengeance!

Arrow Video Extras:
Yet another close match-up here gang that I will, for now, declare as a tie because I just don't know how Well Go USA's behind the scenes featurette stacks up against Arrow Video's.

PHANTASM: RAVAGER
Synopsis: After battling with the Tall Man in Phantasm: Oblivion, a battered Reggie wanders through the desert in search of his missing friend, Mike. After recovering his 1971 Hemi ‘Cuda, Reggie is targeted by two of the Tall Man’s Sentinel Spheres and destroys them. He awakens suddenly to find himself sitting in a wheelchair pushed by none other than the elusive Mike! Although overjoyed by their reunion, Reggie is in this alternate dimension an aged and weary old patient in a psychiatric ward.

And only he remembers their battled and bloodied past with the Tall Man. Reggie must travel between dimensions and discern what is reality in order to confront the mysteries at the heart of a decades-long struggle against evil. He is met with new and familiar faces along the way, and an epic showdown on the Tall Man’s home world awaits!

Arrow Video Extras:
Up to this point, it has been pretty even between both PHANTASM boxed sets. But in my opinion, Arrow Video just pulled into the lead because they offer up a bit more here than Well Go USA. Arrow boasts yet another "audience reaction" audio track, a new making-of featurette, deleted scenes with optional commentary, and the neat little "throwaway" Phantasm and You series recap. But Well Go USA can pull off a tie (or maybe even a win) if their sixth Blu-ray disc delivers phans more than Arrow's! Let's take a look!

ARROW VIDEO'S BONUS DISC:
Ok, so clearly the Well Go USA bonus disc is superior, but in the end, both sets end up being more or less the same. (Though Well Go USA has recently added even more bonus material on almost every disc!) I guess this will finally come down to overall presentation....


When it comes to packaging, I actually prefer Well Go USA's set, which seems to be a large box that contains each film in its own Blu-ray amaray case, complete with REVERSIBLE COVER ART! The set will also contain the 120-page PHANTASM COMPENDIUM, as well as a reversible 21 x 27 poster!

Arrow Video's set seems to have all six of their discs stored within (what appear to be) cardboard sleeves (Booooo!) that feature new artwork by artist Gary Pullin. Their set comes with a 152-page book about the PHANTASM series, plus a replica of the "Phantasm Sphere." (Which you have to lift up and out of the box to get to the movies!)

So to sum everything up: Both sets seem to feature the same exact transfers, and basically the same special features (though it seems that Well Go USA has really beefed up their discs since the first announcement). The only huge difference is that Arrow put more effort into their packaging - the sphere and collectible book are a nice touch!

It's really close, but in my opinion, Well Go USA is the winner. But honestly, this is all personal preference, and I think everyone's final decision will boil down to pricing and availability. While Arrow's set is impressive, it is currently in the ballpark of $93.00 U.S. dollars (and that's before international shipping), as opposed to the $80.00 price tag for Well Go USA's release. Also, Arrow's PHANTASM COLLECTION is Region B locked, meaning you'll have to purchase a region free Blu-ray player to enjoy it.

Ultimately, what set you choose is up to you Vault Dwellers, but I sincerely hope that I've helped your decision making process a little bit easier by digging into the details of both PHANTASM sets.

Posted by The Vault Master at 3:39 AM