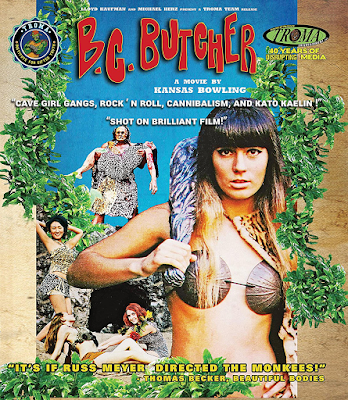 Four years ago I interviewed a teenage girl who wanted to make her own movie. With an amazing knowledge of the Horror genre and a "can do" spirit, young Kansas Bowling did the impossible and shot her first film, B.C. BUTCHER, in 16mm and got it distributed! Congrats Kansas!

Now, let's take a closer look at this release!

Synopsis: When a tribe of cavewomen imparts cruel justice on one of their own, their fate takes a turn for the worst. After discovering and falling in love with the corpse sacrificed by the girl-gang, a lone wandering giant of pre-historic mythos is inspired to homicide.

Consequently the cavewomen are menaced by the heartbroken and bloodthirsty cave-brute with a grudge, and the prophetess among them is ignored when she predicts the tragic outcome. “BC Butcher” is hailed as the first pre-historic slasher film to ever be made. Shot on brilliant 16mm film, the movie features actor Kato Kaelin, a cameo from Rodney Bingenheimer of KROQ Radio, and a performance by Southern California rock group “The Ugly Kids!"

Extras:
B.C. BUTCHER is now available wherever discs are sold, and it won't break the bank! You can pick up a copy now at AMAZON or BULLMOOSE. But if you're the type of person that would prefer to preview this film first, you can always watch it HD, exclusively at TROMA!