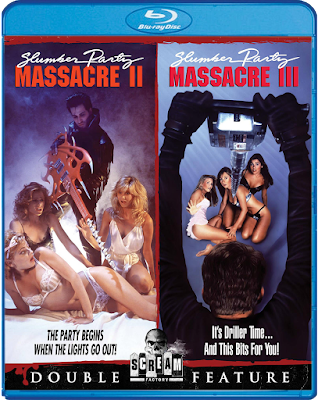 Though I already own the SLUMBER PARTY MASSACRE trilogy on DVD, it's about time for an upgrade. Thankfully Scream Factory was up to the task, and gave us fans the closest thing we'll probably ever have to a definitive release for these fun Horror sequels!

Synopsis for Slumber Party Massacre II: The only sane survivor of SLUMBER PARTY MASSACRE, Courtney (Crystal Bernard), dreams of the drill murderer returning. She can't shake the horrible feeling that she and her friends will be viciously tormented and brutally butchered. Again and again the nightmare returns. Dazed, Courtney loses control. And her nightmare crosses into reality. No one believes her, until it's too late. The driller killer returns, reincarnated as an evil rocker. He methodically stalks them; then violently gores them to death...one by one.

Synopsis for Slumber Party Massacre III: Seven California co-eds are dresses to kill... and a murderer is, well, dressed to drill. He's an insomno-maniac looking for luscious bods to bore and it looks like he'll find them at the Slumber Party Massacre. The Driller Killer is back in Part III of the classic horror fest. This time Jackie, Diane, and Martia are three high school girls who love a good time. When they party, they bust out of their bikinis and break out the brews – but the driller killer's out for a thrill with his drill...and he's ready to kill!