On January 31st, Lionsgate's Vestron Collector's Series releases THE LAIR OF THE WHITE WORM and PARENTS on Blu-ray! 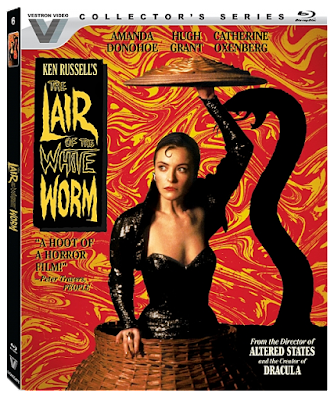 JANUARY 31ST MARKS THE BLU-RAY DEBUTS OF "THE LAIR OF THE WHITE WORM" AND "PARENTS," COURTESY OF LIONSGATE'S VESTRON COLLECTOR'S SERIES!

I've been a Scream Factory fan for a while now, and have just recently begun digging into Arrow Video's catalog. But Lionsgate's Vestron Blu-ray label hasn't quite caught on with yours truly just yet. It's not that I don't like the titles they are releasing (I made sure to grab CHOPPING MALL and the WAXWORK double feature as soon as they were available), but the cost of each release is well... a bit expensive.

Still, they have been doing a bang-up job on all their cult Blu-ray releases, and I look forward to playing catch-up when I get some more expendable income! And now I'll have two more cult faves (that I haven't seen!) to add to my growing list of discs that I plan on adding to my collection.

THE LAIR OF THE WHITE WORM
Synopsis: James D'Ampton (Hugh Grant) returns to his country castle in England. Legend has it that James' distant ancestor once slayed the local dragon- a monstrous white worm with a fondness for the sweet flesh of virgins. The young Lord dismisses the legend as folklore, until archaeology student, Angus Flint, unearths a massive reptilian skull and the ancient worship site of a pagan snake god on James' property.

When James' virtuous girlfriend, Eve (Catherine Oxenburg), suddenly disappears, he and Angus set out to investigate the foreboding cavern said to be the worm's lair where a centuries-old mystery begins to uncoil.

Extras:
THE LAIR OF THE WHITE WORM will be available wherever Blu-rays are sold on Tuesday, January 31st! You can order a copy now at AMAZON, BULLMOOSE, or DIABOLIK DVD! PARENTS
Synopsis: Meet the Laemles, and taste the terror in this black comedy, Dad's (Randy Quaid) got a great job, Mom (Mary Beth Hurt) has all the modern conveniences a happy homemaker could ask for, and ten-year-old Michael (Brian Madorsky) has neat new friends, and two parents that kill him with kindness. They're the all-American family of 1954... with one small exception.

Extras:
PARENTS also comes out on January 31st and can be ordered right now at AMAZON, BULLMOOSE, or DIABOLIK DVD!