Scream Factory will warm you up in the DEAD OF WINTER! 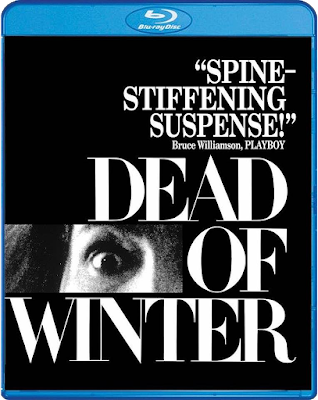 KATIE MCGOVERN WILL DO ANYTHING TO BECOME AN ACTRESS.... EVEN IF IT KILLS HER, IN SCREAM FACTORY'S NEW "DEAD OF WINTER" BLU-RAY!

I've honestly never heard of this classic Horror tale before, so now that it is out on Blu-ray, it's high time I remedy that! Anything with Roddy McDowall is okay in my book, and I've always had a little crush on Mary Steenburgen, so this is a definite must-own for me!

Synopsis: Academy Award winner Mary Steenburgen and Roddy McDowall (FRIGHT NIGHT, PLANET OF THE APES) star in the chilling DEAD OF WINTER! When struggling actress Katie (Steenburgen) is offered the opportunity to replace an actress who has suffered an emotional breakdown during a film shoot, she jumps at the chance for the role of a lifetime.

Arriving at the filming location – an isolated mansion in upstate New York – and getting to know her two mysterious benefactors, Dr. Lewis (Jan Rubes, WITNESS), and Mr. Murray (McDowell), she begins to suspect there's more to the story… but she can't quite put her finger on it. As the pieces fall into place and the weather outside turns frightful, Katie's quest for stardom becomes a fight for survival in this twisty thriller from the director of BONNIE AND CLYDE.

Extras:
DEAD OF WINTER is currently available wherever Blu-ray discs are sold! Pick up your copy today from AMAZON, BULLMOOSE, DIABOLIK DVD, or directly from SHOUT! FACTORY!