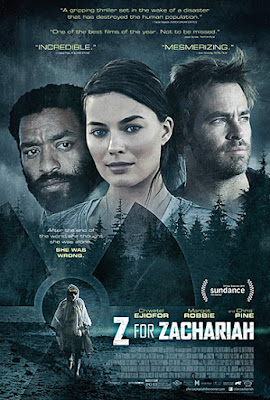 There's been several post-apocalyptic films this year that are worth a look (e.g. MAD MAX: FURY ROAD if you want fun & excitement; THESE FINAL HOURS if you want depression), and it seems like you can add one more to the list: Z FOR ZACHARIAH.

Synopsis: In the not-distant future, a disastrous radioactive event has obliterated most of civilization. Yet somewhere deep in the American South is a valley that remains untouched; evidence of a micro-climate or some other miracle.

A young farm girl, Ann Burden (Margot Robbie), is grittily surviving on her own in this valley, fearing she may actually be the proverbial last woman on earth. Then, she discovers the most astonishing sight of her life: another human being.

John Loomis (Chiwetel Ejiofor) arrives in the valley a cipher; a distraught scientist nearly driven mad by radiation exposure and his desperate search for others. He and Ann share little in common beyond survival. Even so, as Ann nurses Loomis back to health, they build a fragile, imperative strand of trust across the gulf between them - finding solace amidst the eerie reality of their new lives.

With all the time in the world, they even dare to imagine forging a future - for themselves, for humanity. But when a stranger (Chris Pine) enters the valley, their precarious bond begins to unravel. Now, all three must grapple with an unstable situation - one of secrets, suspicions and mortal threats.


Check out the trailer for this upcoming tale of a post-apocalyptic love triangle!


Looks like these two dudes are going to compete (and try to kill each other) in order to knock boots with, what is quite possibly, the last woman on Earth. Z FOR ZACHARIAH will get a limited theatrical release on August 28th, followed by a debut on DVD & Blu-ray. And hey, it's an adaptation of a novel, so you can buy a copy of the book if you're curious!