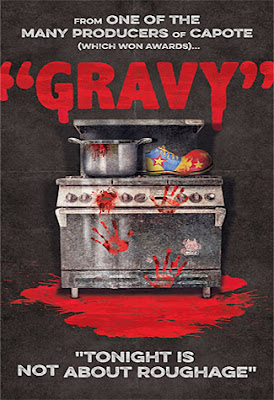 Just got word today that Scream Factory has added James (Shawn Spencer in PSYCH) Roday's GRAVY to their upcoming slate of releases! Honestly, this is the first time I'm hearing about this film, but it sounds like it'll be a blast, and a perfect fit for Scream's impressive catalog of Horror titles.

Synopsis: An irreverent, daring and wickedly-fun horror comedy, GRAVY walks a perfect line of tension and release, laughs and scares. It’s Halloween night. A trio of costumed misfits, with very special dietary requirements, seizes a Mexican cantina and forces the staff to engage in a late night of gluttony. The only caveat is what’s on the menu… and who will survive til morning!

From James Roday: "I dreamt of cannibals, pop culture and Mexican food. That dream came true in the hands of a stellar ensemble cast and precision blood splatter. GRAVY is a very dark comedy for grown ups who also like a little gore on the menu. We look forward to trick or treating genre fans with the film later this year..."

No word on an actual street date yet, but if Roday's comment is any indication, this looks like it'll be an October release from our friends at Scream Factory! Stay tuned for more news and updates about this upcoming horror/comedy title!