Pre-order THE DEAD NEXT DOOR: ULTIMATE EDITION on Indiegogo! 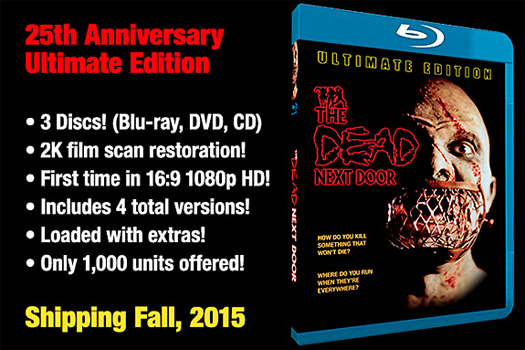 THE DEAD NEXT DOOR was one of those "lost" films I managed to procure in the early days of the internet, and I've proudly kept my DVD of it displayed in my gigantic film collection. But it is definitely time for an upgrade, and luckily, that's exactly what is happening!


Tempe Video recently announced the launch of an Indiegogo crowdfunding campaign to support preorders for a 3-Disc “Ultimate Edition” Blu-ray of the 1990 underground zombie favorite THE DEAD NEXT DOOR, the boutique cult label’s first HD release.
30 years ago this fall, writer/director J.R. Bookwalter (OZONE, WITCHOUSE II: BLOOD COVEN) embarked on THE DEAD NEXT DOOR, a gory, ambitious Super-8mm horror feature that pits an elite team of Zombie Squad soldiers against hoards of the undead and the secretive religious cult hell-bent on protecting them. The film would ultimately take four years to complete with the help of more than 1,500 Northeast Ohio residents portraying the multitudes of bloodthirsty zombies.
For this one-of-a-kind release, Tempe has assembled four unrated versions of the film, two of which have been created from a brand-new 2K restoration using the original film elements. To celebrate the film’s 25th release anniversary this fall, collectors and fans will now be able to enjoy the movie in 1080p HD in either 4:3 original aspect ratio or 16:9 cropped alongside the standard-definition masters used for previous VHS and DVD releases, together with all of the commentary tracks and extras from with those versions.
To pre-order your very own copy (hurry, because they are limited!), CLICK HERE! Not totally sold on throwing down money on this? Then let's take a closer look at what this 3-disc set has to offer.

DISC 3 (SOUNDTRACK CD)
The disc will be REGION FREE, and have reversible cover art (including the original 1990 Electro Video artwork reproduction autographed by writer/director J.R. Bookwalter + new artwork that has yet to be revealed). And, if the funding goal is met, these additional features may make it into this Ultimate Edition as well:
This is pretty darned impressive, and I sincerely hope they meet their $15,000 goal, because I want it all!  Donate a few bucks if you can, or just throw down some money and secure yourself the last copy of THE DEAD NEXT DOOR you will ever need to buy! The clock is ticking so get to it! Support independent film and pre-order your copy now!