BALLET OF BLOOD pirouettes onto DVD & VHS this December! 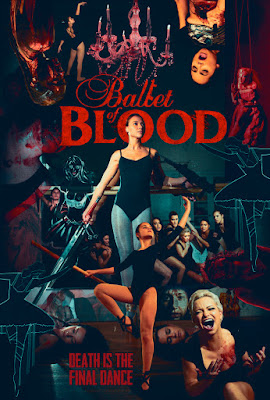 "BALLET OF BLOOD" ARRIVING ON DVD & VHS ON DECEMBER 5TH!

Jared Masters is a young indie filmmaker who has been cranking out feature films and shorts since 2009. His latest is a dark comedy/horror film about a psychopathic ballet dancer. Could be fun!

Synopsis: Her mind was a forest of blood. She craved insanity. The motion picture that has been regarded as the most highly anticipated underground horror film of 2015 has poked its head out of the dark cinematic sea to release its first official trailer.

BALLET OF BLOOD is a film about deadly ballerinas. Its creator, Jared Masters, has always loved the ballet, and really got to express that in this picture. The million-dollar mermaid Sydney Raye stars as Nisa, the sick and sexy psychopath that sprays bullets and seduces her dance instructor, without even trying. Will she get away with her plans of murdering everybody at the company? Ballet of Blood, a psychedelic deluge in terror.

BALLET OF BLOOD recently won the Audience Choice Award at the RIP International Horror Film Festival, and is slated for a DVD (and VHS!) release on December 5th! A VOD release is planned for sometime in March 2016!


Scope out the trailer for BALLET OF BLOOD!


There's some hilarious dialogue in this trailer! Here's a few choice quotes that made me chuckle:

"Bones are beautiful. Curves are not!"

BALLET OF BLOOD is scheduled for release this October (just in time for Halloween)! I'll be sharing more details and info about the film as I get them! For more input, visit the film's official webpage.