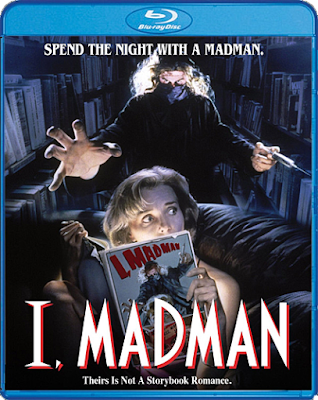 I openly admit that I adore Tibor Takac's THE GATE (something I can't say about its sub-par sequel, or Takac's recent film SPIDERS); it's a great movie! (That also happens to deserve a blu-ray release!)

However, I am in the dark when it comes to I, MADMAN. I own the old MGM DVD, but never got around to watching it. It looks like that'll be changing soon with the impending release of Scream Factory's blu-ray!

Movie Synopsis: After a spine-tingling paperback catches the imagination of bookstore clerk Virginia, she seeks out the author's second book, I, Madman. But once she opens the cover, its eerie tale of obsessive love comes to life, catapulting a disfigured, scalpel-wielding killer from the world of fiction onto the streets of Hollywood with one demented goal: to win Virginia's love, one murder at a time!


Special Features:
I, MADMAN is available wherever blu-ray discs are sold on July 21st! You can currently pre-order it at AMAZON.COM, DIABOLIK DVD, or directly from SCREAM FACTORY (which will net you the disc two weeks early)!