Greetings gang, and welcome to your final weekly edition of Blu-ray and DVD news for the month of April! This week is mostly made up of direct-to-Blu-ray titles, such as THAT GUY DICK MILLER, EVANGELINE, and ALTER EGOS. However, there are a few cool Scream Factory releases, including SSSSSSS and DEATH BECOMES HER! Vinegar Syndrome throws their hat into the arena with a double feature of CRYPT OF THE LIVING DEAD & HOUSE OF THE LIVING DEAD, and Arrow Video puts out a 2-Disc Special Edition of THE ZERO BOYS.

There's some other cool stuff out today (don't forget KRAMPUS!) so scroll down to see what's new!


We're nearly done with April Vault Dwellers (can you believe how fast this month is flying by?) and while there isn't a very large list of genre titles this week, the quality surely makes up for the quantity. Scream Factory hits it out of the park yet again, with their new Collector's Edition release of Tobe Hooper's TEXAS CHAINSAW MASSACRE PART 2! Kino Classics gives us the classic PANIC IN THE YEAR ZERO, while Arrow Video wins this week with their new Special Edition Blu-ray of Larry Cohen's THE STUFF, and their complete OUTLAW GANGSTER VIP Blu-ray Collection!

There's some other fun releases out this week so scroll on down to see them all!

Submit your film to the 2016 HorrorHound Film Festival now! 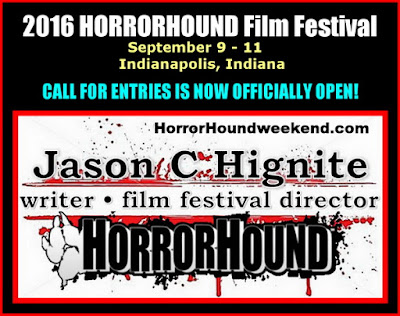 Attention indie filmmakers: The 2016 HorrorHound Film Festival is now accepting entries! So if you've got a finished film, or are wrapping up production on your indie Horror movie, consider entering it into this fest!

Call for Entries for the September 2016 HorrorHound Film Festival is now open. The film fest will take place as part of HorrorHound Weekend, September 9-11, 2016 in Indianapolis, Indiana. Our September event is consistently a success with a 500+ seat screening room that is at capacity for nearly every film.

HorrorHound Film Fest fans have had a chance to get premiere and/or early peeks at such films as LET THE RIGHT ONE IN, MARTYRS, TUCKER AND DALE VS. EVIL, NIGHTBREED (Director's Cut), DARIO ARGENTO'S DRACULA, TURBO KID, TALES OF HALLOWEEN, OLD 37, LAKE EERIE, MANIAC (remake), and many other modern genre favorites!

We actively support indie horror and indie filmmakers throughout the year. Come and be a part! Submit your film to the HorrorHound Film Festival! Early-bird pricing until April 15.

Stay tuned for more updates about the HorrorHound Film Festival as September gets closer!

Posted by The Vault Master at 1:19 AM 0 comments


Well Vault Dwellers, it looks like we're back on schedule here at the News Vault! Tomorrow brings a small, but very satisfying number of genre releases on DVD and Blu-ray. Scream Factory reigns supreme with their collector's edition release of John Carpenter's VILLAGE OF THE DAMNED, and their double feature of DESTROYER and EDGE OF SANITY!

But those releases sort of pale in comparison to the amazing 3-Disc Limited Edition Blu-ray of BRIDE OF RE-ANIMATOR that is being released by Arrow Video! It boasts 2K scans of BOTH versions of the film, three audio commentaries, and numerous featurettes, making it a definite must own!

Also be on the look-out for the new Steelbook release of IT FOLLOWS and (if you're still in a superhero mood after taking in BATMAN V SUPERMAN) JUSTICE LEAGUE VS. TEEN TITANS. While DC's live-action films are a mixed bag, you can always count on them to create good animated fare!

There's not too much else to highlight this week, so scroll on down to see what's new!

Posted by The Vault Master at 1:48 AM 0 comments

Scream Factory Raves from the Grave in July with their definitive Collector's Edition Blu-ray of RETURN OF THE LIVING DEAD! 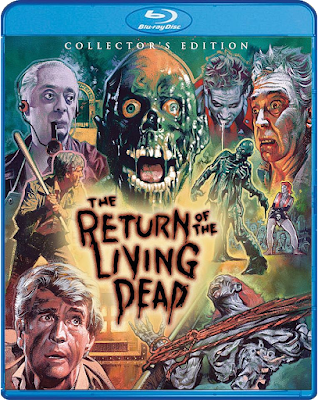 ON JULY 19TH, SCREAM FACTORY RELEASES THE LAST "RETURN OF THE LIVING DEAD" BLU-RAY RELEASE YOU'LL EVER HAVE TO BUY! IT'S TIME FOR AN UPGRADE ZOMBIE FANS!

Ho-lee crap! I knew this title was coming from Scream Factory later this year but never did I think that it'd be on par with Scream Factory's outstanding 3-disc ARMY OF DARKNESS release! Read onward and try not to drool too much Vault Dwellers!

Film Synopsis: Just when you thought it was safe to go back to the cemetery, those brain-eating zombies are back and hungry for more tasty mortals! A fiendish mix of outrageous humor and heart-stopping terror, THE RETURN OF THE LIVING DEAD is a veritable smorgasbord of fun (LA Herald-Examiner) filled with skin-crawling jolts, eye-popping visuals and relentless surprise!

On his first day on the job in a medical supply warehouse, poor Freddy (Thom Matthews) unwittingly releases nerve gas from a secret U.S. military canister, unleashing an unbelievable terror. The gas re-animates an army of corpses, who arise from their graves with a ravenous hunger for human brains! And luckily for those carnivorous cadavers, there is a group of partying teens nearby, just waiting for their brains to be devoured!

Considered one of the campiest undead romps of its time, the film helped launch the career of scream queen Linnea Quigley (NIGHT OF THE DEMONS, SORORITY GIRLS IN THE SLIMEBALL BOWL-O-RAMA) and features a killer soundtrack with tracks from many songs from punk artists such as The Cramps, T.S.O.L. SSQ and 45 Grave.

Disc 2 Extras:
HOLY JUMPED-UP, BALD-HEADED JESUS PALOMINO! A new 2K scan?! Three audio commentaries?! Two still galleries?! A WORKPRINT?! This blows the previous MGM releases out of the water! There's nothing to think about here folks: If you love this movie, you NEED this Collector's Edition from Scream Factory!

Once again it is due out on July 19th, and you can order it now from AMAZON.COM, or get it directly from SHOUT! FACTORY! If you choose the latter method, you will receive your RETURN OF THE LIVING DEAD goodness TWO WEEKS EARLY with an 18 x 24 poster of the new cover art!

Note: There was a Deluxe Edition of this available for pre-order, but it is SOLD OUT. The only difference between the deluxe and standard release was the inclusion of a second poster and alternate slipcover art by Joel Robinson, that would have shipped three weeks early.

Though it's not a guarantee, if you missed out on this, you can try to e-mail the powers that be at Shout! Factory (info@shoutfactory.com) and get yourself on the cancellation list. So in the event that someone changes their mind and cancels their order, you could benefit!


Sorry for the lateness of this post Vault Dwellers. I took a brief break from all things Vault-related because my employer of eleven years lost his hard-fought battle with pancreatic cancer after a brave, nineteen-month struggle. (R.I.P - Rob Robinson) He was a good man that treated my coworkers and I like family. And though we didn't always see eye to eye, or share many interests, he always had my back and readily offered a helping hand.

But the time has come to move forward, and get back to the daily grind. And what better way to do it than by telling you all about the DVDs & Blu-rays that came out this past Tuesday?

By far the most important title to be released this week is easily STAR WARS: THE FORCE AWAKENS! It's an enjoyable trip back to the galaxy far, far away that many of us grew up with, and has me eager to watch all future additions to this unstoppable Disney franchise! Not in the mood for a space opera? Well several genre distributors have got you covered!

Scream Factory gives us a double dose of high-def Horror with THE HALLOW and #HORROR, while Arrow Video delivers a triple threat of new releases that you will want on your shelves at home: THE BLACK CAT (1981), DEATH WALKS TWICE: THE FILMS OF LUCIANO ERCOLI (which includes DEATH WALKS AT MIDNIGHT and DEATH WALKS ON HIGH HEELS), and YOUR VICE IS A LOCKED ROOM AND ONLY I HAVE THE KEY!

If none of those titles excite you, and you happen to enjoy anime, there's plenty too choose from this week, including the new GHOST IN THE SHELL movie, Part 2 of MOBILE SUIT ZETA GUNDAM saga, and PARASYTE: MAXIM COLLECTION 1! There's also a several bargain-priced DVD boxed sets, and a few cool direct-to-DVD titles (THE HOARDER looks promising), so there's plenty of options for you this week!

Scroll down to see the full list of this week's genre releases!