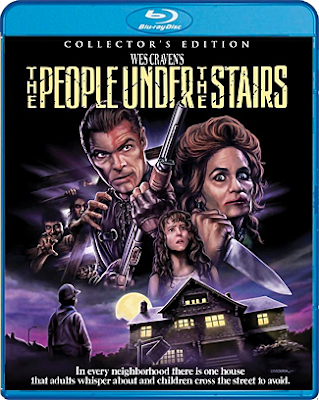 THE PEOPLE UNDER THE STAIRS was one of the more bizarre movies I watched during my formative years, and I didn't quite care for it. Then I gave it a second chance many years later and loved the hell out of it!

Based loosely upon an actual news story of a Santa Monica couple that abused their children and kept them locked away in their home, Craven's film plays like a modern day urban fairytale.

Film Synopsis: A kid nick-named "Fool" (Brandon Quintin Adams) gets roped into robbing the home of a pair of cold-hearted landlords that are planning to boot his family out onto the street. But things are not as they seem, as he (and the two other burglars, led by Ving Rhames) soon discover that the (possibly incestuous) brother-sister duo (Everett McGill and Wendy Robie) are insane, and have dozens of children caged within the bowels of the house.

Trapped, with no hope of contacting help, "Fool" must rely on his own street smarts to outwit the two murderous psychopaths, and free the trapped "people under the stairs!"

Special Features:
Holy cow! This is a HUGE step up from the previous Blu-ray release from Universal Home Video, which was a bare bones affair. Even if nothing major has been done with the Audio & Video (which weren't all that bad to begin with), the new cover art (which as always, is reversible!) and plethora of extras, makes this title a "must own" in my book!

THE PEOPLE UNDER THE STAIRS (COLLECTOR'S EDITION), hits stores and e-tailers on Tuesday, August 11th! Order your copy now from AMAZON.COM, DIABOLIK DVD, or directly from SCREAM FACTORY.

If you order from the Scream/Shout! Factory website, you will get the disc THREE WEEKS EARLY, and packaged with an 18x24 poster (while supplies last) that features the disc's newly commissioned artwork!

Thanks for giving another one of my favorites the royal treatment Scream Factory! Keep up the awesome work!