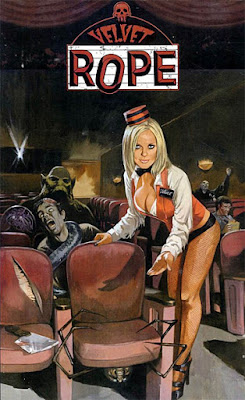 CHECK OUT THESE PROMO TRAILERS FOR UPCOMING ADAPTATION OF ARCANA COMICS' "VELVET ROPE!"

Underbelly has returned with new episodes on YouTube! Their most recent video showcases two proof-of-concept trailers for a feature-film adaptation of Arcana Comics' popular VELVET ROPE.


VELVET ROPE is a 90-page horror anthology, with a variety of tales, including "Baker's Dozen," "Club Vampire," "Daddy's Little Girl," as well as an all-new "Eve: Vampire Diva" short. You can order yourself a copy HERE at Amazon.com!

The video you are about to watch below contains two vastly different trailers, with different actresses portraying the ghostly usher of a theater, and both are pretty damned cool. Each trailer was shot in (mostly) one day, within a limited time frame and next to no budget. The final results are surprisingly awesome!

Pretty bad-ass right? I totally dig the EVIL DEAD II-style "filmstrip attack" in the second trailer, and I think a sexy undead usher is a great antagonist for any horror flick! There's a distinct lack of (good) Horror anthologies these days, so I'm totally down for a VELVET ROPE movie. If you're on board, let Arcana Comics know, and sent them a message or twenty on Facebook!

Posted by The Vault Master at 4:33 PM