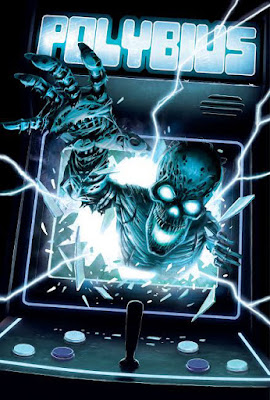 Initially they planned on making a haunted video game tale based around the myth that Atari buried millions of unsold game cartridges in New Mexico (mainly copies of E.T.). However, they were beaten to the punch by James Rolfe, with his feature-length THE ANGRY VIDEO GAME NERD: THE MOVIE.

Going back to the drawing board, Newt Wallen and company decided to retool things and made the film about a haunted POLYBIUS machine. Wait, a what?

POLYBIUS is, for all intents and purposes, an urban legend. Supposedly several arcade cabinets of this mysterious game vanished soon after its 1981 release, for supposedly causing amnesia, insomnia, stress, and night terrors in those who bravely played it. (Read more about Polybius HERE.).

The new concept for the trailer (and eventually a feature film?) is that the Polybius machine is a gateway to another dimension full of evil spirits and monsters. Naturally some video game enthusiasts/historians decide to plug it in and give it a whirl, thus unleashing the evil within. Will the GEEKS & GIRLS with GUNS survive an attack by THE GHOULS? Well, I for one would love to find out!

Scope out the trailer for yourself below, and share it around. If enough interest is generated, then perhaps Arcana Comics will feel the urge to produce the film! (Along with VELVET ROPE as well!)

If you like what you saw, let the creators know, and help support independent cinema!

Posted by The Vault Master at 3:24 PM