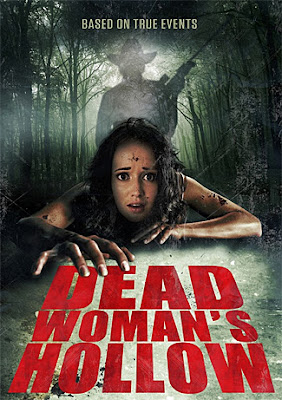 BASED ON A TRUE CRIME, ACCLAIMED HORROR FEATURE, "DEAD WOMAN'S HOLLOW," WILL BE AVAILABLE ON  DVD & VOD ON JUNE 23RD!

Utilizing actual accounts of an attempted double-homicide on the Appalachian Trail, DEAD WOMAN'S HOLLOW looks to become the Mid-Atlantic's version of THE TOWN THAT DREADED SUNDOWN.

Synopsis: Based on the shocking hate crime that ripped through the quiet of Appalachia in 1988, DEAD WOMAN'S HOLLOW follows two attractive young coeds who have set off for a camping trip in the Pennsylvania woods to get away from it all.

After a rifle-toting mountain man discovers they are a couple, the women become his prey: Hunted, shot and left for dead. The local sheriff begins to connect their frightened testimony with unsolved disappearances and murders on the trail. Can he act in time to stop more killings?

Director Libby McDermott took home awards for Best Horror Feature and Best Make Up at the World Music and Independent Film Festival, and Charles Dawson was named Best Male Lead at the WC Horror Film Festival for his turn as small town law enforcement trying to hunt down a murderer in the woods he calls home.


Once again, DEAD WOMAN'S HOLLOW will be available on DVD and VOD on Tuesday, June 23rd! You can order yourself a copy right now at AMAZON.COM!