AVALANCHE SHARKS is coming to Digital HD and VOD on June 30th! 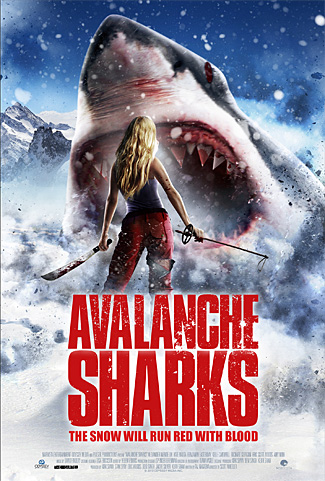 THE SNOW WILL RUN RED WITH BLOOD WHEN "AVALANCHE SHARKS" DEBUTS ON DIGITAL HD & VOD ON JUNE 30TH!

SHARKNADO 3: OH HELL NO! won't be premiering until July 22nd (on SyFy),  so why not check out this other ridiculous killer shark flick in the meantime?

Synopsis: "Bikini Snow Day" is the busiest day of the year at Mammoth Mountain, and the resort is packed with wild co-eds looking for a good time. When an unexpected avalanche rumbles down the mountain, it awakens ancient spirits in the form of massive sharks with a taste for human flesh.

As the body count begins to pile up, the local sheriff must form an unlikely alliance with a motley crew of locals and tourists in order to kill off the terrifying creatures before it’s too late.

Scope out the trailer below to see bikini-clad babes, and ice-sharks that swim through snow!


Hahahahahaha! This looks so ludicrous! Fans of SyFy Original Pictures and Asylum flicks are going to enjoy this one methinks!

AVALANCHE SHARKS will be available on Amazon, Google Play, iTunes, Vimeo and VUDU, as well as On Demand with AT&T and DirecTV, on June 30th! Save the date, invite over some friends, and invest in a few cases of beer, because you are definitely going to need it!