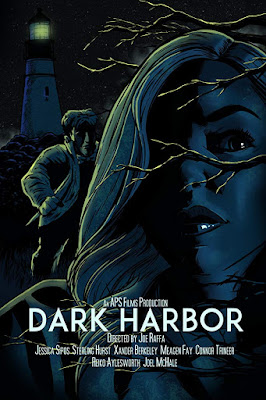 Produced by APS Films, DARK HARBOR recently had its world premiere at the 9th Annual Catalina Film Festival, where it won an "Award of Excellence." From there the film is expected to be screened at other film fests until it is picked up for distribution. Stay tuned for future updates once DARK HARBOR is given a (limited or wide) theatrical release, or is announced on DVD, Blu-ray, and/or Video On Demand!

Synopsis: With the birth of her first child just days away, Olivia (Jessica Sipos) must return to her childhood home island off the coast of Maine, seemingly on the edge of the world, to face her narcissistic mother and attend her father's funeral. Not long after, she uncovers a dark family secret that undoes the foundations of her life. The deeper Olivia searches for answers, the more life-threatening the situation becomes, putting herself and her unborn child in danger.