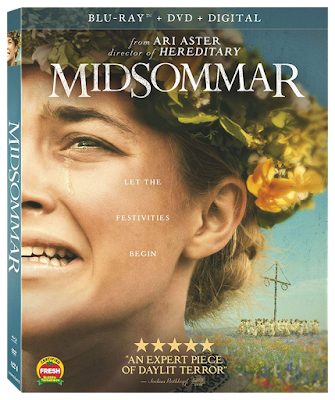 FROM THE DIRECTOR OF "HEREDITARY" COMES THIS CRITICALLY-ACCLAIMED FOLK HORROR TALE!

I have yet to see HEREDITARY (too many movies - so little time!) so I'm not exactly sure what I'm in for when I check out MIDSOMMAR! I've heard a lot of positive buzz about this film (which has been frequently compared to THE WICKER MAN), so I suppose I'll give it a whirl when it comes out October 8th! I should also note that a longer Director's Cut is getting a physical media release on October 28th, with nearly a half-hour of footage added back in, so plan accordingly!

Synopsis: After a family tragedy, a young American couple joins some friends at a midsummer festival in a remote Swedish village. What begins as a carefree summer holiday takes a sinister turn when the insular villagers invite their guests to partake in festivities that grow increasingly unnerving and viscerally disturbing. From the visionary mind of Ari Aster, comes this dread-soaked cinematic fairy tale where a world of darkness unfolds in broad daylight.

Extras:
MIDSOMMAR comes to Blu-ray (and DVD) on October 8th, and should cost between $20 - $25! If this movie sounds like something you'd love to add to your personal collection, order a copy now from AMAZON, BULL MOOSE, or DIABOLIK DVD! And don't forget to look for MIDSOMMAR: DIRECTOR'S CUT on October 28th!