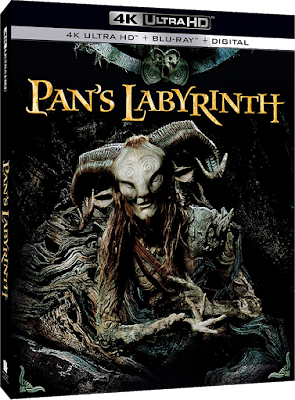 It's weeks like this, where I'm glad I snagged a 4K Blu-ray player Vault Dwellers! Guillermo del Toro's PAN'S LABYRINTH is an equally beautiful and haunting fairy tale, about a young girl escaping the horrors of the real world, by exploring the fantastical ones in her imagination! Kubrick's THE SHINING is a brilliant descent into madness that has earned its status as a Horror classic, and ZOMBIELAND is a fun take on a tired Horror sub-genre with one of the absolute greatest celebrity cameos of all time! And now all three of these great films area available on 4K UHD! Let's take a closer look, shall we?

Synopsis: Following a bloody civil war, young Ofelia enters a world of unimaginable cruelty when she moves in with her new stepfather, a tyrannical military officer. Armed with only her imagination, Ofelia discovers a mysterious labyrinth and meets a faun who sets her on a path to saving herself and her ailing mother. But soon, the lines between fantasy and reality begin to blur, and before Ofelia can turn back, she finds herself at the center of a ferocious battle between good and evil.

Extras:
PAN'S LABYRINTH apparently look and sounds amazing on the 4K Ultra HD format so I can't wait to eventually add it to my collection and see for myself. The disc currently costs between $25 - $32, and can easily be obtained from AMAZON or BULL MOOSE! 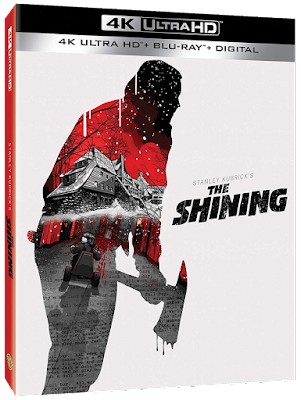 Synopsis: Jack Torrance (Jack Nicholson) becomes the winter caretaker at the isolated Overlook Hotel in Colorado, hoping to cure his writer's block. He settles in along with his wife, Wendy (Shelley Duvall), and his son, Danny (Danny Lloyd), who is plagued by psychic premonitions. As Jack's writing goes nowhere and Danny's visions become more disturbing, Jack discovers the hotel's dark secrets and begins to unravel into a homicidal maniac hell-bent on terrorizing his family.

Extras:
Warner Bros.' new restoration of THE SHINING is now available to purchase, and should cost between $25 - $35! Though all the extras have been ported over from the previous Blu-ray release (minus the trailer), the picture quality alone makes this worth owning! Get yourself a copy of THE SHINING 4K UHD disc now from AMAZON, BULL MOOSE, or DIABOLIK DVD! 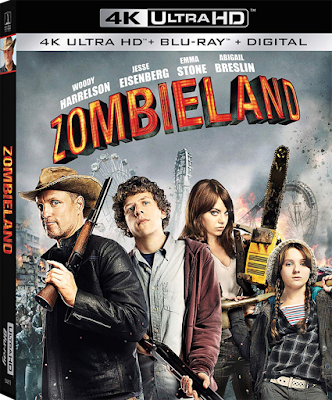 Synopsis: Nerdy college student Columbus (Jesse Eisenberg) has survived the plague that has turned mankind into flesh-devouring zombies because he's scared of just about everything. Gun-toting, Twinkie-loving Tallahassee (Woody Harrelson) has no fears. Together, they are about to stare down their most horrifying challenge yet: each other's company. Emma Stone and Abigail Breslin co-star in this double-hitting, head-smashing comedy.

DISC TWO
With ZOMBIELAND: DOUBLE TAP heading to theaters in a few short weeks, it's no surprise that Sony would give the original film some love. The 10TH ANNIVERSARY EDITION 4K Ultra HD Blu-ray of ZOMBIELAND is now available and should cost around $20! Get yourself a copy now from AMAZON or BULL MOOSE!