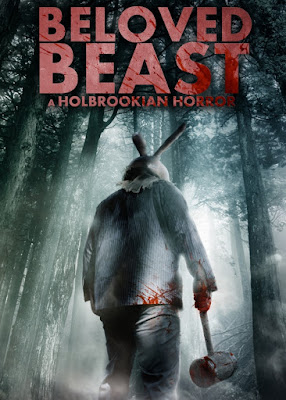 FRESH OFF A LIMITED THEATRICAL RELEASE, "BELOVED BEAST" IS NOW AVAILABLE TO WATCH ON DEMAND!

Egads! This may very well be the longest  contemporary indie Horror flick of all time Vault Dwellers! Running at approximately THREE HOURS, Jonathan Holbrook's BELOVED BEAST features a murderous antagonist in a bunny mask that escapes from an asylum, befriends a child, and terrorizes a small town.

BELOVED BEAST is currently available to rent or own digitally from AMAZON, GOOGLE PLAY, YOUTUBE, or VUDU! It will be available on DVD at a later date.

Synopsis: Nina (Sanae Loutsis) is only twelve years old when she loses her parents in a car accident. Now living with her aunt, Nina is no longer in the best of company. Escaping into her imagination, and into the woods, she meets a strange masked man. He should not have been brought home. Now, his murder spree is just getting started with Aunt Erma (Joy Yaholkovsky) and the local townsfolk, in this brutally bloody horror film!