Ringo Starr Narrates THE POINT: Coming to Blu-ray in February 2020! 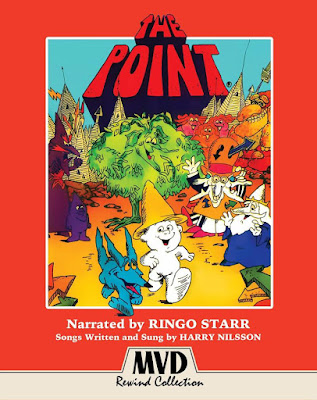 THE CLASSIC ANIMATED FEATURE GETS A SECOND LIFE ON BLU-RAY ON ITS 50TH ANNIVERSARY THANKS TO MVD REWIND COLLECTION!

While I have seen some great animated features like FIRE & ICE, WIZARDS, and HEAVY METAL, stuff like Fred Wolf's THE POINT passed me by. After airing on television in 1971 (narrated by Dustin Hoffman), the film did get a release on VHS & Laserdisc (where it was narrated by Ringo Starr), and showed up on cable (narrated by Alan Thicke on The Disney Channel) before fading into obscurity. But apparently THE POINT has garnered somewhat of a cult following over the decades, which prompted MVD to seek out a print in order to create a Blu-ray release.

While a search for the 35mm negative came up empty, the folks at MVD did manage to track down a 16mm print and strike the best 2K restoration they could muster from the materials made available to them. Fans of classic animation and people that actually saw this on TV in their youth will definitely want to check this out!

Synopsis: Years ago there was a place called The Land of the Point, because everything in The Land of the Point had one - the barns, the houses, the cars, everything - even the people. Everyone, that is, except Oblio (Mike Lookinland - The Brady Bunch), who was born round-headed. Since he had no point, Oblio - along with his trusty dog, Arrow - was banished to the Pointless Forest. Join them to see what wonders await these two intrepid travelers as they make their way on their amazing, song-filled journey of discovery!

THE POINT is based upon the album of the same name by Grammy Award winning singer/songwriter Harry Nilsson. According to Nilsson himself, "I looked at the trees and realized all the leaves came to points and even the branches came to points. I thought, 'Oh! Everything has a point, and even if it doesn't, there's a point to it.'"

Produced in 1970, the animated film version of THE POINT first aired February 2, 1971, as an ABC Movie of the Week. The film was directed by Academy Award winner Fred Wolf and produced by Murakami-Wolf Films in association with Nilsson House Music. Complete with story and songs written by Nilsson, and narration by Ringo Starr (CAVEMAN), THE POINT is a timeless enchanting fable for the whole family to enjoy!

Extras:
MVD Rewind Collection's 50th Anniversary Ultimate Edition of THE POINT arrives on Blu-ray (and digital) on Tuesday, February 11, 2020! While the transfer might look a little rough, this is easily going to be the best THE POINT has ever looked or sounded before! And with over two hours of (mostly) new extras, the (current) $30 pricetag doesn't really seem all that bad! THE POINT is currently only available to order on AMAZON but will likely pop up on BULL MOOSE (and possibly DIABOLIK DVD) as the release date nears!