Scream Factory Wants to Ignite Your Arachnophobia with ITSY BITSY! 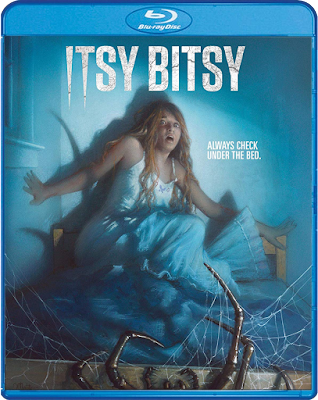 CRAWL DOWN THE WATERSPOUT... OF TERROR (!!!) WITH SCREAM FACTORY'S NEWEST RELEASE!

I'm a big fan of "natural horror" movies Vault Dwellers. You know the ones: Mother Nature has had enough of mankind's abuse and lashes out with armies of insects or animals (or sometimes just one really big bug, bear, or shark). And when it comes to spiders, I always enjoy watching those EIGHT LEGGED FREAKS march upon humanity.

From giant arachnid flicks (TARANTULA, EARTH VS. THE SPIDER, THE GIANT SPIDER INVASION) to films where legions of spiders invade small towns (KINGDOM OF THE SPIDERS, ARACHNOPHOBIA, TARANTULAS: THE DEADLY CARGO) I have seen my fair share. But now Scream Factory has unleashed an all new spider movie to DVD & Blu-ray, and I can't contain my excitement - I simply must see it!

Synopsis: A single mother, Kara (Elizabeth Roberts), moves from New York to the quiet countryside with her two children for a job opportunity she can't afford to turn down. The family moves into their humble new guesthouse, where her teenage son, Jesse (Arman Darbo), begins the unhappy task of looking after his little sister, Cambria (Chloe Perrin). Kara begins her work as a private nurse to Walter (Bruce Davison), a man stricken with multiple sclerosis and an appraiser of rare antiquities ... but Walter's secret past soon invites doom and terror.

Jesse discovers a mysterious relic of ancient origin that had been brought to the household by Ahkeeba (Treva Etienne), a shady international associate of Walter's. All too quickly, they discover that the relic contains more than just legends and myths. Inside waits a terrifying creature born of ancient darkness and pure instinct: a prehistoric cave spider unlike the modern world has ever seen.

Extras:
Scream Factory's ITSY BITSY is now available on Blu-ray (and DVD for those of you who still buy them) and should cost you around $16 - $17. If you dig killer spider movies as much as I do, then pick up a copy of ITSY BITSY today from AMAZON, BULL MOOSE, or directly from SHOUT! FACTORY.