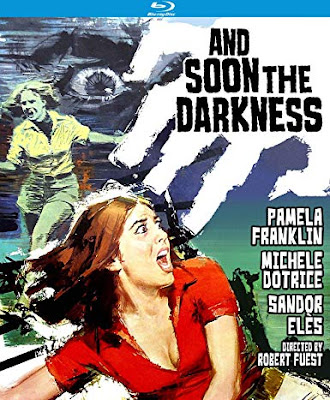 While I love everything coming from Scream Factory, Arrow Video, Vinegar Syndrome, Severin Films, and other labels, I've gotta say that I've probably picked up more new discs from Kino this year than anybody else! And speaking of Kino, they've just brought three obscure UK thrillers to Blu-ray, with gorgeous new 4K remasters! AND SOON THE DARKNESS shows you what could happen when you don't use the buddy system when bicycling through France, THE MIND BENDERS is a Cold War-era thriller about a Doctor subjecting himself to sensory-deprivation experiments, and SUDDEN TERROR follows a young Maltese boy that's being hunted by a pair of assassins! If any of that sounds interesting to you, then continue reading!

Synopsis: Two young British nurses bicycling through the desolate French countryside. A mysterious stranger on a lonely stretch of road. The women become separated and soon after, one of them disappears. Now the remaining girl, alone and frightened, begins an increasingly desperate search for answers among the strangely uncooperative locals. Where is her friend? Was there a murder? And as the darkness approaches, is the killer now stalking her?!

Pamela Franklin (THE LEGEND OF HELL HOUSE) and Michele Dotrice (THE BLOOD ON SATAN'S CLAW) co-star in this unsettling shocker directed by Robert Fuest (the DR. PHIBES movies). AND SOON THE DARKNESS remains a favorite of thriller fans for its sexual menace, sinister style and one of the most quietly chilling final twists in ’70s British cinema. Original story and screenplay by Brian Clemens (SEE NO EVIL) and Terry Nation (THE HOUSE IN NIGHTMARE PARK) with top-notch cinematography by Ian Wilson (THE CRYING GAME, BELOW).

Extras:
AND SOON THE DARKNESS is now available on Blu-ray (and DVD) and should cost between $18 - $20. Get yourself a copy today from AMAZON, BULL MOOSE, DIABOLIK DVD, or directly from KINO LORBER! 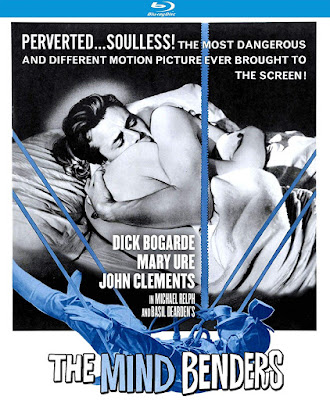 Synopsis: A government scientist commits suicide while clutching a briefcase full of cash, and the police accuse him of being a Communist spy. But when his friend Dr. Henry Longman (Dirk Bogarde - ACCIDENT, MODESTY BLAISE) suspects that the death may have been the result of brainwashing, he decides to prove his theory by subjecting himself to sensory deprivation. Can the doctor resist the experiment’s sadistic side effects… or will he fall under the control of THE MIND BENDERS?

Mary Ure (WHERE EAGLES DARE) and Wendy Craig (THE SERVANT) co-star this classic 1963 sci-fi thriller directed by Basil Dearden (DEAD OF NIGHT, THE MAN WHO HAUNTED HIMSELF) that went on to influence Ken Russell’s mind-bending ALTERED STATES. Written by James Kennaway (TUNES OF GLORY) and beautifully shot by Denys N. Coop (BILLY LIAR) with a rousing score by Georges Auric (THE WAGES OF FEAR).

Extras:
THE MIND BENDERS is now available on Blu-ray (and DVD) and should cost between $18 - $20! Order a copy today from AMAZON, BULL MOOSE, DIABOLIK DVD, or directly from KINO LORBER! 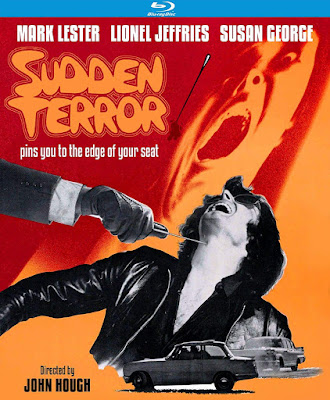 Synopsis: Living on the island of Malta, Ziggy (Mark Lester - CROSSED SWORDS) is an 11-year-old boy with an overactive imagination and a habit of telling wild lies. But when he sees the brutal assassination of a visiting African president by two rogue policemen, nobody will believe his story. Can Ziggy convince anybody that he is telling the truth before the psychotic cops are able to hunt down and murder the only eyewitness?

Extras:
Kino Lorber's Special edition of SUDDEN TERROR is now available to purchase wherever Blu-ray discs are sold, and should cost between $18 - $20! Order a copy today from AMAZON, BULL MOOSE, DIABOLIK DVD, or directly from KINO LORBER!