Warner Archive Releases DON'T BE AFRAID OF THE DARK to Blu-ray on October 22nd! 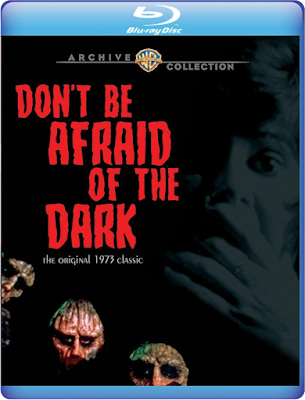 Confession time Vault Dwellers: I've never seen DON'T BE AFRAID OF THE DARK (though I have seen its remake)! Granted this movie aired on television ten years before I existed, and has a history of going in and out of print on a pretty regular basis, but damn it I should have seen it by now!

But I'm glad I waited because Warner Archive is finally bringing this much-loved made-for-TV horror tale to Blu-ray for the first time ever, remastered in 4K and sporting several audio commentaries! If you happened to grow up with this film and would like to take a trip down memory lane, join me in taking a closer look at its shiny new Blu-ray release!

Synopsis: An old house ... a mysterious locked room ... a terrifying secret. All of the elements that make a horror movie memorably chilling get a taut, spooky reworking in DON'T BE AFRAID FO THE DARK. Kim Darby (TRUE GRIT) and Jim Hutton (THE GREEN BERETS) star as Sally and Alex, young marrieds who inherit a crumbling mansion. Despite warnings to leave well enough alone in her new home, Sally unlocks the mysterious room, opens a bricked-up fireplace, and unleashes a horde of hideous, whispering, murderous, miniature demons only she can see and hear! This is the original TV movie that inspired the 2010 theatrical remake starring Katie Holmes and Guy Pearce.

Extras:
Warner Archive's DON'T BE AFRAID OF THE DARK Blu-ray will be available to own on Tuesday, October 22nd, and should cost between $18 - $22! Halloween is less than two weeks away, so treat (or trick) yourself, and pick up a copy of this  TV Horror classic from AMAZON, BULL MOOSE, DIABOLIK DVD, or from WBSHOP!