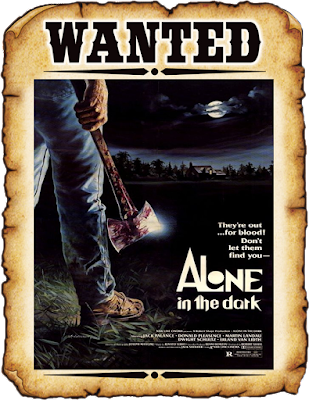 I know I've said this before but it bears repeating: Back in the ole video store days, VHS cover art was on point. It was eye-catching and the best designs told you everything you needed to know about the movie before you even read the description on the back.

And some of those covers seared themselves into your brain, never to be forgotten. For me, that is definitely the case with Jack Sholder's 1982 slasher classic, ALONE IN THE DARK. (Not to be confused with Uwe Boll's awful video game adaptation featuring Christian Slater. Poor Christian Slater....)

The cover is a bit misleading as there's MORE than one killer in the film, and if memory serves, an axe doesn't really feature prominently in the multiple slayings that take place. Still, the image of a madman, bloody axe in hand in the foreground, silently contemplating the secluded house in the distance on a moonlit night, is somewhat chilling. The movie itself, is far from being your typical slasher movie, and is equal parts hilarious (Donald Pleasance's super laid-back demeanor in this movie cracks me up), and horrifying (you just may find yourself peeking under your bed to make sure a knife-wielding Martin Landau isn't under there).

While Jack Sholder's ALONE IN THE DARK seems to have finally found its audience all these years later, the movie has remained out of print for quite some time. And as we near the film's 37th Anniversary (it was released in theaters on November 19, 1982), wouldn't it be great if someone announced a Blu-ray release of this criminally underrated (and underseen) Horror classic?!

Convinced that Dan Potter has murdered their former psychiatrist, the "Third Floor Four" plot to avenge (the very much alive) Harry Merton. Though breaking out seems impossible, after a power outage the four men execute an escape plan and eventually lay siege to Dr. Potter's home. What follows is a nail-biting sequence of events where the Potter clan is cut off from any aid, and must fend for themselves against a brutal surprise attack orchestrated by Frank Hawkes and his fellow psychos.

Availability: ALONE IN THE DARK is completely out of print. If you can find a reasonably-priced VHS tape or DVD then go play the lottery afterward because you are one lucky son of a gun! Otherwise, the only way to currently watch this Horror classic is a low-quality video on YouTube.

Current Rights Holder: New Line Cinema produced and distributed ALONE IN THE DARK theatrically in November of  '82 followed by an eventual VHS release from RCA / Columbia Pictures Home Video. In 1993 Image Entertainment brought the film to Laserdisc, then released it to DVD on September 13, 2005 in a great Special Edition that contained cast interviews and a director's commentary. The last time ALONE IN THE DARK was available on any format was in 2007 when Image added it to a four-movie collection that also featured AFRAID OF THE DARK, and RELENTLESS 3 & 4.

So who owns the rights at the moment? Well... I'm not entirely sure. The easy choice would be New Line (now a subsidiary of Warner Bros.) so there's a slight chance that ALONE IN THE DARK could eventually become part of the Warner Archive Collection, or even join Scream Factory's catalog as they have recently been raiding (mostly Hammer Horror) titles from Warner's vaults.

However, if we look back at Image Entertainment another possibility opens up. Image was merged with Acorn Media in April 2012, and became RLJ Entertainment. (Which was acquired by AMC Networks last July.) So there's a definite possibility that if (or hopefully when) ALONE IN THE DARK gets a Blu-ray release, there may be a "RLJE Films" logo on its spine!


Blu-ray Wishlist:
Honestly Vault Dwellers, I'd just be happy to own this movie on a bare bones Blu-ray, but it doesn't hurt to dream big, right? I'm not entirely sure who to prod for an HD release of this film, but as ALONE IN THE DARK nears its 40th Anniversary, hopefully my pleas to the movie gods are heard. I guess all we can really do is wait and hope for the unexpected announcement of ALONE IN THE DARK (LIMITED DELUXE COLLECTOR'S EDITION) sometime in the not-to-distant future!