HAXAN is Coming to Blu-ray on October 15th with a New 2K Transfer! 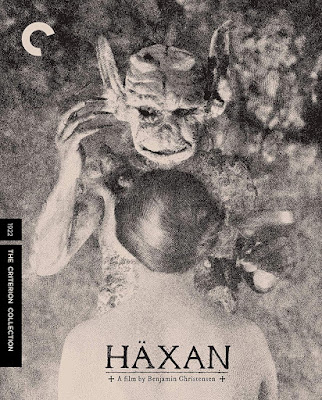 BENJAMIN CHRISTENSEN'S FILM ABOUT "WITCHCRAFT THROUGH THE AGES" BECOMES PART OF THE CRITERION COLLECTION!

I am not well-versed in the realm of silent film - to date, I think the only ones I've seen is 1925's THE LOST WORLD and THE CALL OF CTHULUH (2006). But I have to say that HAXAN looks pretty.... well.... crazy! Witches, child sacrifice, torture, evil nuns that smooch demons on the butt, and the Devil himself all make appearances in this silent epic! Up until now I've never really paid HAXAN any mind, but after watching the trailer for it, I now realize that I absolutely need to see it!

Synopsis: Grave robbing, torture, possessed nuns, and a satanic Sabbath: Benjamin Christensen's legendary silent film uses a series of dramatic vignettes to explore the scientific hypothesis that the witches of the Middle Ages suffered the same hysteria as turn-of-the-century psychiatric patients. Far from a dry dissertation on the topic, the film itself is a witches' brew of the scary, the gross, and the darkly humorous. Christensen's mix-and-match approach to genre anticipates gothic horror, documentary re-creation, and the essay film, making for an experience unlike anything else in the history of cinema.

Extras:
Criterion's upgrade of Spine #134 seems worth it for the 2K restoration alone, but whether you already own the previous DVD release, or don't own it at all, HAXAN definitely seems like a worthwhile addition to any (Horror) movie collection! This new Blu-ray release arrives on Tuesday, October 15th, and should cost between $26 - $32! Order a copy of HAXAN today from AMAZON, BULL MOOSE, DIABOLIK DVD, or directly from CRITERION!