A Hurricane is the Least of Everyone's Worries in CRAWL - Coming to DVD & Blu-ray on October 15th! 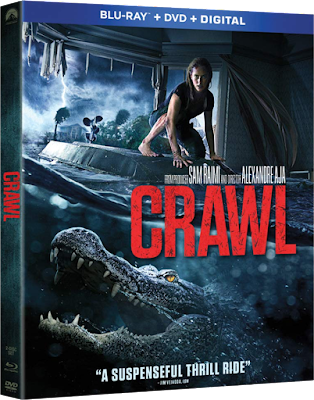 DIRECTED BY ALEXANDRE AJA AND PRODUCED BY SAM RAIMI, THIS NEW KILLER GATOR FLICK IS A GUARANTEED GOOD TIME!

When it comes to films featuring man-eating crocodiles or alligators, I'm typically first in line to check it out! That being said, I totally missed out on CRAWL during its theatrical run this Summer, so I'm definitely going to go out of my way to watch it next week when it hits Blu-ray! If you are a fan of "natural horror" films as well, then you'll definitely want to pick up a copy of CRAWL on October 15th! Or, if you're impatient, you can watch it digitally right now!

When a massive hurricane hits her Florida hometown, Haley (Kaya Scodelario) ignores evacuation orders to search for her missing father (Barry Pepper). Finding him gravely injured in the crawl space of their family home, the two become trapped by quickly encroaching floodwaters. As time runs out to escape the strengthening storm, Haley and her father discover that the rising water level is the least of their fears!

Extras:
Paramount's Blu-ray (and DVD) of CRAWL arrives in stores on Tuesday, October 15th and should cost around $23! Order yourself a copy of this killer gator flick today from AMAZON or BULL MOOSE!