On October 8th Get a Double-Dose of Horror from Director Jordan Peele in 4K! 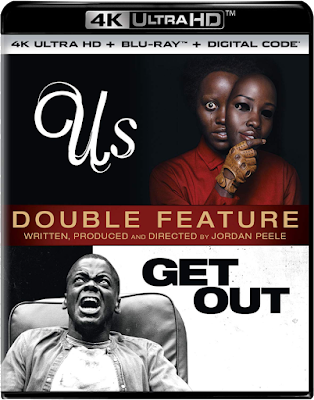 JORDAN PEELE'S "US" AND "GET OUT"  HAVE BEEN PAIRED UP IN A NEW 4K ULTRA HD DOUBLE FEATURE FROM UNIVERSAL!

It's kind of funny how people who have spent a large part of their careers doing Comedy, can be so adept at crafting great Horror stories. Case in point, Jordan Peele: His movie GET OUT, which I saw during it's initial theatrical release, was really enjoyable, and I've heard a lot of good things about his followup film US (which I still have yet to see).

Now both of his critically-acclaimed tales of terror are available in a handy 4K double feature set from Universal! So if you've held off on buying either film, now's the time to add some Peele to your movie collection!

US Synopsis: From Academy Award-winning visionary Jordan Peele comes another original nightmare. Starring Oscar winner Lupita Nyong'o (12 YEARS A SLAVE) and Winston Duke (BLACK PANTHER), an endearing American family is pitted against a terrifying and uncanny opponent: doppelgängers of themselves.

GET OUT Synopsis: When Chris (Daniel Kaluuya), a young African-American man, visits his white girlfriend's (Allison Williams) family estate, he becomes ensnared in the more sinister, real reason for the invitation. At first, Chris reads the family's overly accommodating behavior as nervous attempts to deal with their daughter's interracial relationship, but as the weekend progresses, a series of increasingly disturbing discoveries lead him to a truth that he could have never imagined. This speculative thriller from Blumhouse (producers of THE VISIT, the INSIDIOUS series, and THE GIFT) and the mind of Jordan Peele (Key & Peele, KEANU) is equal parts gripping thriller and provocative commentary.

GET OUT
Universal's double feature 4K UHD / Blu-ray / Digital combo of US & GET OUT is due out on Tuesday, October 8th! This release should cost you between $34 - $40 and will be available from most retailers, including AMAZON and BULL MOOSE!