Arrow Video's Got "Daddy Issues:" TOYS ARE NOT FOR CHILDREN Comes to Special Edition Blu-ray on October 8th! 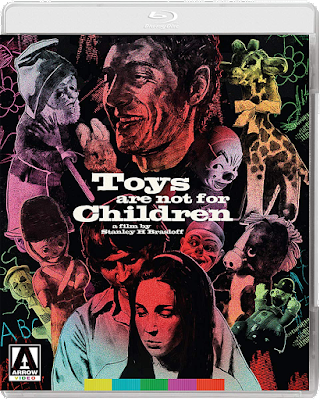 Leave it to Arrow to dredge up an obscure exploitation film from the 70s and not only give it a 2K restoration, but load it up with tons of new special features! TOYS ARE NOT FOR CHILDREN seems like a darker take on the EMMANUELLE-style story of a young woman discovering/exploring her sexuality. Personally not my cup of tea, but if that sounds titillating to you, then continue reading onward Vault Dwellers!

Synopsis: Psychological trauma and aberrant sexuality abound in this twisted 1972 tale of a young woman whose severe daddy issues send her on an unforgettably bleak downward spiral.

Grim, quirky and strangely affecting in equal measure, Stanley H. Brasloff's TOYS ARE NOT FOR CHILDREN is a truly one-of-a-kind effort from the heyday of the American exploitation independents, which builds to a haunting and devastating climax that lingers long after the credits roll.

Extras:
Arrow Video's Special Edition of TOYS ARE NOT FOR CHILDREN arrives on Tuesday, October 8th and should cost between $25 - $28! Order yourself a copy today from AMAZON, BULL MOOSE, DIABOLIK DVD, or directly from ARROW VIDEO!