A Trio of New Kino Lorber Titles Arrive on October 8th: BABY BLOOD, HERCULES IN THE HAUNTED WORLD, and MY BOYFRIEND'S BACK! 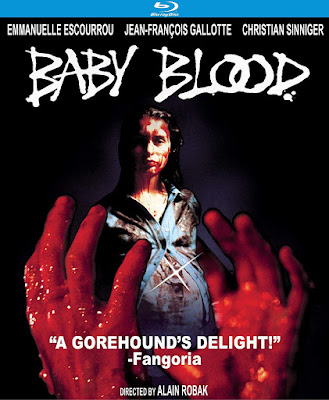 WOMB-RAIDING PARASITES, A DEMI-GOD'S TRIP TO HADES, AND ZOMBIE PROMS ARE JUST SOME OF THE HIGHLIGHTS OF KINO LORBER'S LATEST BLU-RAY TITLES!

GORE! PEPLUM! ROMANTIC ZOMBIE COMEDY! Kino Lorber is truly gifting us with an eclectic mix of films next week Vault Dwellers! BABY BLOOD (which also goes by THE EVIL WITHIN) involves a beautiful woman who has an unwelcome (and hungry) guest nestled within her womb! I had this (apparent) masterpiece on VHS back in the day, but never got around to watching it (a symptom of having too many movies)!

HERCULES IN THE HAUNTED WORLD was directed by Mario Bava and has bodybuilder Reg Park invading Hades to find a cure for his ailing Princess, and MY BOYFRIEND'S BACK features an undead Chris Lowery crawling from his grave to take Traci Lind on a date! (Can you blame him?!) If any of these have caught your interest, then continue onward to learn more about Kino Lorber's trio of new releases!

Synopsis: It's Time to Feed the Baby! It is a voracious parasite from the dawn of creation, surviving centuries in search of the one thing it needs: to be born of a human. But when this cunning creature slithers inside a sexy circus performer (voluptuous French starlet Emmanuelle Escourrou - LADY BLOOD), it demands gallons of fresh blood to grow stronger. Now this reluctantly expectant mommy and her chatty mutant fetus are off on a cross-country killing spree, where pre-natal care means violent carnage and the ultimate mother's milk is BABY BLOOD!

Also known as THE EVIL WITHIN, and co-written and directed by Alain Robak (ADRENALINE), this French shocker is now presented totally uncut and uncensored with all its infamous womb-raiding, gore-spewing and flesh-baring beautifully restored in HD!

Extras:
BABY BLOOD arrives on Blu-ray (and DVD) on October 8th, and should cost you between $18 - $20! Order yourself a copy of this French creature feature now from AMAZON, BULL MOOSE, DIABOLIK DVD, or directly from KINO LORBER! 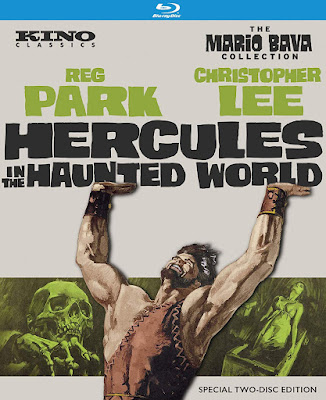 Synopsis: When his beloved Princess Deianira (Leonora Ruffo) goes mad, strong man Hercules (Reg Park) turns to the oracle Medea for advice. Medea tells him to travel to the underworld and find the Stone of Forgetfulness, a mysterious crystal that will cure Deianira's ills. Along with his friend Theseus, Hercules ventures into the dark and foggy depths of Hades to find the stone. Meanwhile, Deianira's power-hungry uncle, Lico (Christopher Lee), plots to steal the throne that is her birthright.

Extras:
While I'm not entirely sure how long each cut of HERCULES IN THE HAUNTED WORLD is, the fact they they are all included is super awesome! Along with the 2K transfer and audio commentary, this release is definitely worth the $20 - $23 pricetag! This Hercules adventure arrives on Tuesday, October 8th - If you're a fan of sword & sandal flicks, or just a Mario Bava fan in general, order this Blu-ray from AMAZON, BULL MOOSE, DIABOLIK DVD, or KINO LORBER! 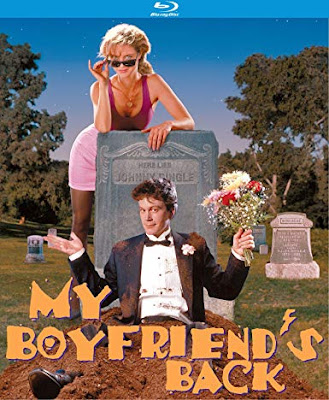 Synopsis: Teenager Johnny Dingle (Andrew Lowery - COLOR OF NIGHT) will do anything to keep his date with the hottest girl in school—even come back from the grave! You see, Johnny had the perfect scheme to win the heart of Missy McCloud (Traci Lind - CLASS OF 1999), the town beauty. Unfortunately, Johnny's scam goes sour and he winds up dead. Even so, Johnny's determined to keep his date - unaware of the hilarity waiting for him upon his return.

Extras:
Unfortunately I couldn't find much info about the audio & video on this release Vault Dwellers! This title was previously released by Mill Creek Entertainment so Kino's disc will either be on par, or likely better than what Mill Creek offered up! And along with the heap o' new extras on this release, fans of this film won't mind paying $18 - $20 for it! MY BOYFRIEND'S BACK (SPECIAL EDITION) will be available on Tuesday, October 8th - order a copy today from AMAZON, BULL MOOSE, DIABOLIK DVD, or directly from KINO LORBER!