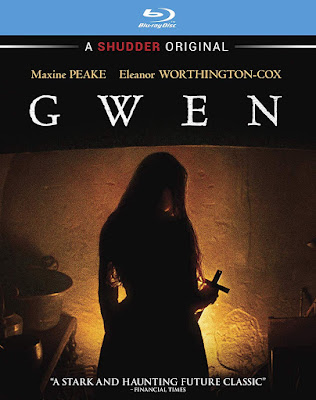 IF YOU ENJOY ATMOSPHERIC, SLOWBURN HORROR FILMS, THEN THIS DARK WELSH FOLK TALE MIGHT JUST BE FOR YOU!

Slasher films, monster movies, and creature features are my meat and potatoes Vault Dwellers, which is why I suspect that I won't be a huge fan of GWEN. Still, I have been watching a ton of foreign Horror films on Shudder lately and have been loving what I'm seeing (I highly recommend ONE CUT OF THE DEAD, COLD HELL, and TIGERS ARE NOT AFRAID), so I'm willing to give GWEN a shot when it premieres on the streaming service later this month. And heck, if I end up liking it enough, I just may pick it up on Blu-ray so I can revisit it at my leisure!

Synopsis: Gwen is a young girl whose life seems to be collapsing around her. Struggling with her mother's mysterious illness, her father's absence and a group of angry villagers threatening to take her farm, Gwen must find the strength to guide her family through the darkness. But as a malevolent presence begins to take grip of her home, it becomes apparent there is a greater evil that may be too strong to overcome.

It is interesting to note that GWEN is a feature-length version of Director William McGregor's short film WHO'S AFRAID OF THE WATER SPRITE? from 2018! If you're curious about it, you can watch it HERE.

Extras:
GWEN will be available on both DVD (AMAZON - BULL MOOSE) & Blu-ray on Tuesday, October 8th, and should cost between $15 - $20! If it sounds like something you'd enjoy, treat yourself to a copy from AMAZON, BULL MOOSE, or DIABOLIK DVD! If you aren't entirely committed to owning the film, you can watch it on SHUDDER on October 17th!