THE FEARLESS VAMPIRE KILLERS and FROM BEYOND THE GRAVE Come to Blu-ray on October 15th! 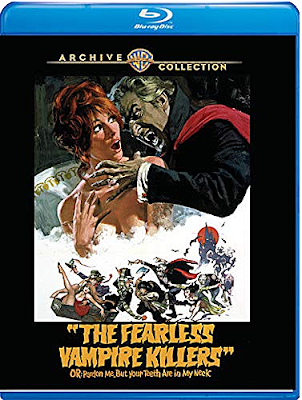 Chalk up two more films that I just haven't gotten around to watching yet Vault Dwellers! Roman Polanski's comedic vampire tale makes its Blu-ray debut with a brand new HD remaster of the film's longer 107-minute cut! FROM BEYOND THE GRAVE, which was Amicus Productions' final Horror anthology, also comes to Blu-ray for the first time and receives an HD remaster! FROM BEYOND THE GRAVE was released on October 8th, and THE FEARLESS VAMPIRE KILLERS will be available on October 15th - continue reading to learn more about both releases!

Synopsis: It's the living end, a fancy-dress ball for blood fiends in Count Von Krolock's Transylvanian castle. Surely no mortal would be foolish enough to infiltrate this "hemogobbling" horror of a soiree. But partygoers notice something in the ballroom mirrors: the reflections of humans – vampire killers – dancing among them.

Director/cowriter Roman Polanski (THE PIANIST, ROSEMARY'S BABY, CHINATOWN) spoofs vampire movies with this droll balancing act of shocks and laughs. He also portrays Alfred, mousy apprentice to a doddering researcher of vampirism (Jack MacGowran)... and the lovestruck defender of gorgeous Sarah (Sharon Tate) when the Count (Ferdy Mayne) tries to make her the ghoul of his dreams. It's all fang-tastic fun!

Extras:
THE FEARLESS VAMPIRE KILLERS arrives on Blu-ray on October 15th, and will cost between $18 - $22! This upcoming Warner Archive title can easily be obtained from AMAZON, BULL MOOSE, DIABOLIK DVD, or directly from the WBSHOP! 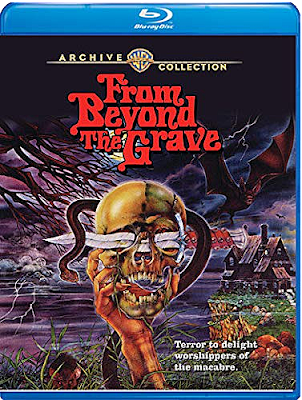 Synopsis: Amicus Productions classic horror portmanteau makes its Blu-ray disc debut just in time for the horror-days! Bolt the door, lower the lights and settle in for a stylish five-episode supernatural shocker possessed of a shivery all-star cast and drenched in evil.

Welcome to Temptations Ltd., a decrepit antique shop whose unwary customers get more than they bargain for from the wily proprietor (Peter Cushing). Much more. Go to the head of the horror class if you can predict who'll join the ranks of the doomed from among this role call of distinguished British actors: Ian Bannen, Ian Carmichael, Diana Dors, Lesley-Anne Down, Margaret Leighton, Donald Pleasence, Nyree Dawn Porter, David Warner and more.

A mirror. A medal. A snuff box. An ornate door. All unleash novelty surprises for the characters – and you – in these wickedly horrific tales FROM BEYOND THE GRAVE!

Extras:
Though it is a bare bones release, I would still very much like to add this Amicus title to my Blu-ray collection! FROM BEYOND THE GRAVE is currently available to own and should cost between $18 - $22. Order a copy today from AMAZON, BULL MOOSE, DIABOLIK DVD, or directly from the WBSHOP!