Umbrella only released a handful of new DVDs & Blu-rays today, which is rather shocking, but it seems that they are going for quality over quantity this month. First up is their double feature of two Ray Harryhausen classics: FIRST MEN IN THE MOON has British scientists visiting the insect-like denizens of Earth's moon, while 20 MILLION MILES TO EARTH focuses on a poor Venusian creature that has been stranded here on Earth. Scared and alone the "Ymir" lashes out at humanity, leading to a final (and tragic) showdown at the Colosseum in Rome, Italy!

ART OF THE DEAD features a series of paintings that depict the "Seven Deadly Sins" and cause those that come into contact with them to become corrupted. THE FIELD GUIDE TO EVIL is a newer Horror anthology, featuring frightening tales (and creatures) from around the world, and THE WHEEL features a paraplegic inmate who volunteers for an experiment that not only allows him to walk again, but has turned him into a living weapon!

ANNOUNCEMENTS:
* On November 6th, Umbrella Entertainment is bringing Kimble Rendall's CUT to Blu-ray! This forgotten 2000 slasher flick is getting a new 4K restoration, and will be loaded with extras including an audio commentary, cast & crew interviews, and more!

* Also due out on November 6th is Umbrella's (bare bones) Blu-ray of YOUNG GUNS II! 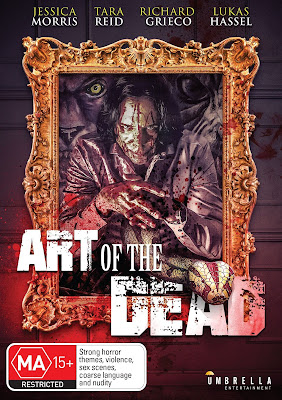 Synopsis: When Dylan Wilson (Lukas Hassel - THE BLACK ROOM) purchases a collection of seven paintings to hang in his wealthy estate, he has no idea what horrors he has unleashed for himself, his wife, Gina (Jessica Morris - One Life to Live) his son, Louis, his teen-age daughter, Donna, and his two little kids.

Only Father Mendale knows what evils lurk inside this deadly art and the history of Dorian Wilde, the artist who made a pact with dark forces when he created these paintings that represent the seven deadly sins.

Now, anyone who comes in contact with these pictures are corrupted by Pride, Lust, Gluttony, Sloth, Greed, Envy, and Wrath. It's up to Father Mendale and Louis' girlfriend, Kim, to save Dylan and his family before they are all destroyed by the ART OF THE DEAD!

ORDER "ART OF THE DEAD" ON DVD FROM AMAZON OR UMBRELLA ENTERTAINMENT! 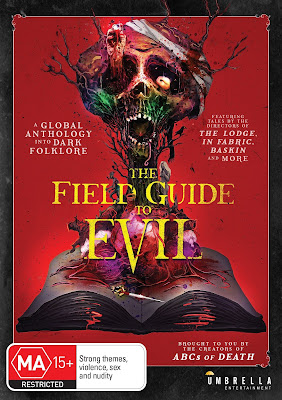 Synopsis: A feature-length anthology film. They are known as myths, lore, and folktales. Created to give logic to mankind's darkest fears, these stories laid the foundation for what we now know as the horror genre. THE FIELD GUIDE TO EVIL was created by the same team behind THE ABCS OF DEATH, and features eight tales created by an international assortment of genre directors!

ORDER "THE FIELD GUIDE TO EVIL" ON DVD FROM AMAZON OR UMBRELLA ENTERTAINMENT! 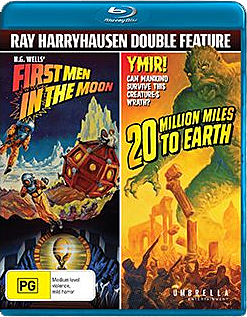 Synopses: FIRST MEN IN THE MOON is based on legendary science fiction novelist H.G. Wells’ story, and is brought to life in eye-catching DYNAMATION by director Nathan Juran (THE 7TH VOYAGE OF SINBAD) and celebrated filmmaker Ray Harryhausen.

Brilliant and brave British scientist Joseph Cavor (Lionel Jeffries - CHITTY CHITTY BANG BANG) revolutionizes a gravity deflecting device and builds his own spacecraft with the sole intention of taking a trip to the moon. Accompanied by loyal explorers Arnold Bedford (Edward Judd) and Kate Callender (Martha Hyer), they encounter all manner of intergalactic peril along the way and even discover an insect-like alien race living under the moon's surface.

In 20 MILLION MILES TO EARTH (which was also directed by Nathan Juran and features the masterful stop-motion work of Harryhausen) the first spaceship to visit Venus crash lands off the coast of Sicily, freeing a small Venusian creature called the Ymir. Eventually growing to enormous size, it threatens the city of Rome. 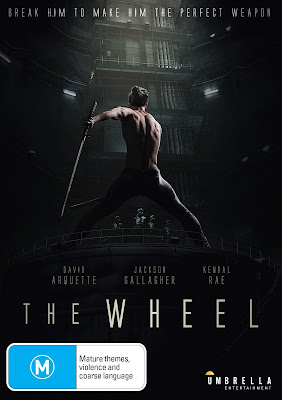 Synopsis: Sometime in the near future, in a world where governments and organizations blur the line between national security and ethical behavior, paraplegic prison inmate Matt Mills (Jackson Gallagher - PLAYING FOR KEEPS) meets "The Board" of Satoshi-Telefair Industries, who thank him for joining the program.

Under pressure and with a promise to make him walk again, Mills agrees to volunteer. He is injected with a synthetic nanomaterial (N-B2C4B) and suffocated, only to wake up alone in a steel cell, with restored use of his legs - in the first spoke of an experimental apparatus - THE WHEEL...

ORDER "THE WHEEL" ON DVD FROM UMBRELLA ENTERTAINMENT!