THE KILLER OF DOLLS and WOMAN CHASING THE BUTTERFLY OF DEATH Now Available on Blu-ray Disc! 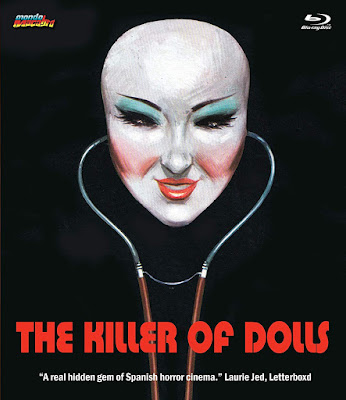 Leave it to Mondo Macabro to release some truly oddball stuff to Blu-ray! I've never even heard of either THE KILLER OF DOLLS or WOMAN CHASING THE BUTTERFLY OF DEATH, but they both sound completely crazy - in the best ways possible of course!

THE KILLER OF DOLLS is a Spanish Horror film from 1975 that sure sounds like it has elements of Italy's giallo cinema. The film follows a disgraced medical student, who is caught up in a series of murders involving a killer that wears a doll's mask! The Korean WOMAN CHASING THE BUTTERFLY OF DEATH features a student that frequently dodges death and runs afoul of some ghosts! Both discs are loaded with extras, and feature new HD remasters of each film - continue reading to get all the details!

Synopsis: In this bizarre and totally unique piece of Spanish horror, David Rocha plays Paul, a young man thrown out of medical school due to his inability to deal with the sight of blood. He goes home to Montpellier in France where his father is gardener on a huge estate belonging to Countess Olivia (played by Helga Liné, ageless diva of Spanish horror). We soon discover that fear of blood is not Paul's only quirk: He was raised as a girl after his sister died and likes to play with dolls, performing strange operations on them, attempting to extract their hearts.

Meanwhile, in the park surrounding the Countesses' home, a number of young girls have been found murdered. The killer seems to be a mysterious individual wearing a black wig, a white doll mask, and speaks with a woman's voice. As the killings multiply around him, Paul sinks ever deeper into a world of hallucination and nightmare.

Released here for the first time ever on Blu-ray and in its US premier, THE KILLER OF DOLLS is an original and unforgettable film that will be treasured by all who like their horror weird and unsettling.

Extras:
Mondo Macabro's THE KILLER OF DOLLS Blu-ray is now available wherever Blu-ray discs are sold, and should cost between $18 - $20! Get a copy today from AMAZON, BULL MOOSE, DIABOLIK DVD, or directly from MONDO MACABRO! 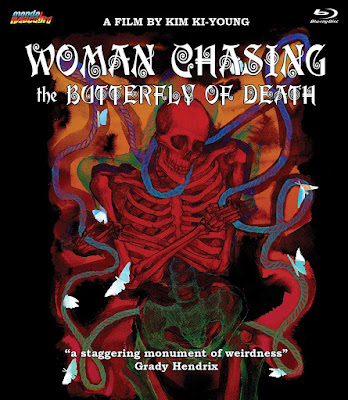 WOMAN CHASING THE BUTTERFLY OF DEATH (1978)

Synopsis: Like a kind of crazy cinematic ghost train ride, WOMAN CHASING THE BUTTERFLY OF DEATH takes us on a journey deep into the darkness of one man's fears and fantasies. That man is Young-gul, a lonely and rather morbid student in late 1970's South Korea. Narrowly surviving a murder-suicide attempt by a woman wearing a butterfly pendant, he next finds himself besieged by a seemingly insane bookseller who claims he can never die.

Even after Young-gul burns the man's body his skeleton comes back to taunt him. As if that weren't enough, the poor student then finds himself the victim of a beautiful thousand year old woman (she looks about 25) who says she is hungry and want to eat his liver….

The director, Kim Ki-young, was one of Korea's most successful film makers. His 1960 production THE HOUSEMAID is now a recognized classic of world cinema. With this film he goes far beyond the bounds of the real and takes us into a world where anything seems possible, a world where a kind of dream logic rules. Almost impossible to summarize, the film is nevertheless insanely enjoyable. A real one of a kind production that opens our eyes to the limitless possibilities of cinema.

Extras:
Mondo Macabro's new Blu-ray of WOMAN CHASING THE BUTTERFLY OF DEATH is currently available to own and should cost between $18 - $30! Get your copy of this Korean oddity today from AMAZON, BULL MOOSE, DIABOLIK DVD, or directly from MONDO MACABRO!