Kino's Got You Covered This Halloween: PARASITE 3D, PHOBIA, TRILOGY OF TERROR II, and ZOLTAN: HOUND OF DRACULA Now Available on Blu-ray! 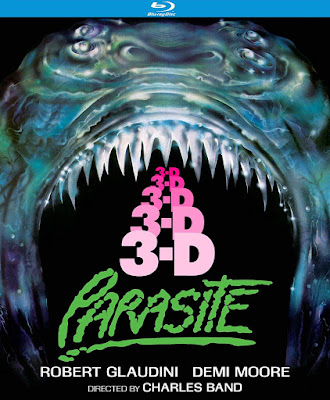 Yowza! Having just taken advantage of Kino's current Halloween Blu-ray Sale, I feel like I should've waited for their quartet of new titles! PARASITE has both the 2D and 3D versions of the film and stars a young Demi Moore, trying to survive in a post-apocalyptic world filled with bitey little creatures! PHOBIA is a classic "whodunnit" where a psychologist's phobia-ridden patients are being killed off one by one, and TRILOGY OF TERROR II offers up multiple short horror tales, and features the triumphant return of the deadly Zuni fetish doll!

As for ZOLTAN: HOUND OF DRACULA, this vampire oddity is about Dracula's undead pooch, who makes its way to Los Angeles to find a new master and create an army of vampire-dogs! All four films are now available wherever discs are sold - get 'em all now and add them to the queue of your Halloween horror film marathon!

Synopsis: In the future, cities are ravaged by atomic fallout and controlled by evil corporations that have developed a mutant pair of flesh-eating parasites. One is feeding inside the man who created it. The other has escaped. Now with the help of a young woman left orphaned in the wasteland (Demi Moore - STRIPTEASE, THE SCARLET LETTER), a scientist (Robert Glaudini - WAVELENGTH) on the run must destroy these horrific creatures before they can reproduce. But the more a parasite feeds, the bigger it becomes. And the more it grows, the hungrier and angrier it gets.

Extras:
Hot damn! Along with a 4K restoration and both the 2D & (legit) 3D versions of the film, the inclusion of archival material, plus the new cast & crew interviews, makes this release a must-own in my book! Kino Lorber's PARASITE Blu-ray should cost between $18 - $20, and can be purchased from AMAZON, BULL MOOSE, DIABOLIK DVD, or directly from KINO LORBER! 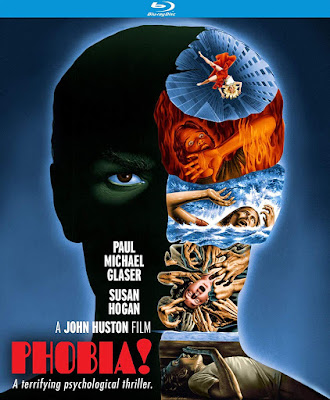 Synopsis: Murder Put an End to Their Fears! The phobia-ridden patients undergoing a unique therapy treatment with Dr. Peter Ross (Paul Michael Glaser, Detective Dave Stansky of TV’s Starsky & Hutch) now face a new terror—murder! One by one they’re being killed off, and the finger points to everyone! Set ’em up. And whittle ’em down. It’s a favorite technique in whodunit suspense-thrillers. And one of the masters is PHOBIA director John Huston (THE MALTESE FALCON, PRIZZI'S HONOR).

See if you can identify the killer as the legendary filmmaker propels you into the most terrifying realm of all: your deepest fears. Screenplay by Lew Lehman (THE PIT), Jimmy Sangster (HORROR OF DRACULA) and Peter Bellwood (HIGHLANDER), based on a story by Gary Sherman (DEAD & BURIED) and Ronald Shuster (ALIEN). The top-notch cast includes Susan Hogan (THE BROOD), John Calicos (THE CHANGELING), Lisa Lang Lois (TRANSFORMATIONS), Alexandra Stewart (GOODBYE EMMANUELLE) and Kenneth Welsh (THE DAY AFTER TOMORROW).

Extras:
Kino Lorber's Special Edition of PHOBIA is now available and should cost you between $18 - $20! Order a copy now from AMAZON, BULL MOOSE, DIABOLIK DVD, or directly from KINO LORBER! 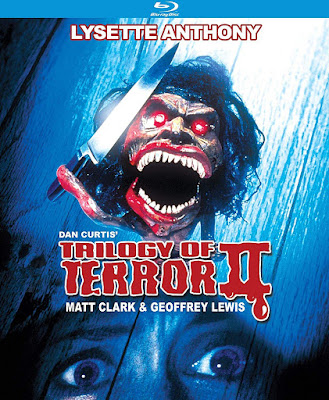 The Graveyard Rats: After bumping off her wealthy husband, a money-hungry wife faces an unexpected complication: a cemetery crawling with flesh-eating rodents. Written by Richard Matheson (THE NIGHT STALKER) and Henry Kuttner (THE TWONKY) and directed by Dan Curtis (THE NIGHT STRANGLER).

Bobby: Monstrous consequences result when a mother strikes a devilish bargain to bring her drowned son back from the dead. Written by Matheson and directed by Curtis.

He Who Kills: When an African Zuni fetish doll is tied to multiple grisly murders, a young scientist investigates… and awakens an unspeakable ancient evil.

Extras:
Kino's Special Edition of TRILOGY OF TERROR II is now available wherever discs are sold, and should cost you between $18 - $20! Order a copy today from AMAZON, BULL MOOSE, DIABOLIK DVD, or directly from KINO LORBER! And don't forget to pick up the classic 1975 original if you don't already own it! 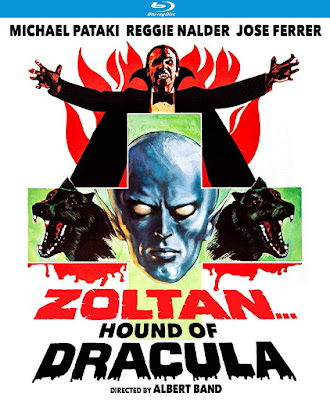 Synopsis: There’s More to the Legend Than Meets the Throat! When the Russian army unearths the vault of Dracula, they accidentally unleash his undead human slave (Reggie Nadler - MARK OF THE DEVIL) and the Count’s vampire hellhound Zoltan. But these friends need a new master and head for Los Angeles to find Dracula’s last living descendant, family man Michael Drake (Michael Pataki - GRAVE OF THE VAMPIRE).

With the help of an international vampire hunter, Inspector Bronco (José Ferrer - THE SENTINEL), can Drake destroy Zoltan and his pack of blood-crazed devil-dogs—before “man’s best friend” fetches the final soul of the damned? Also known as DRACULA'S DOG, this ferociously fun horror film was directed by Albert Band (I BURY THE LIVING, GHOULIES II) and features makeup effects by Academy Award-winner Stan Winston (PARASITE, ALIENS).

Extras:
Kino Lorber's Special Edition of ZOLTAN: HOUND OF DRACULA is now available wherever discs are sold and should cost between $18 - $20! Get yourself a copy today from AMAZON, BULL MOOSE, DIABOLIK DVD, or directly from KINO LORBER!