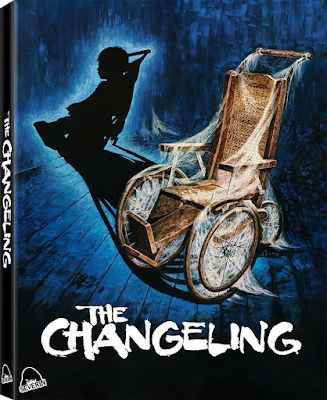 PETER MEDAK'S TALE OF A MAN HAUNTED BY A RESTLESS SPIRIT GETS SOME MAJOR LOVE FROM SEVERIN FILMS!

THE CHANGELING is one of my all-time favorite supernatural fright flicks. It's quite atmospheric, and pulls you right in as George C. Scott's John Russell begins to unravel a mystery that started nearly a century before he moved into a haunted house. I'm very excited about this release and look forward to eventually watching this film in glorious high-definition! If you're a fan of THE CHANGELING, read on Vault Dwellers and rejoice!

Synopsis: The 1980 horror classic in HD for the first time ever in America! It is perhaps the most chilling supernatural thriller of our time and remains a career peak for star George C. Scott and director Peter Medak (THE RULING CLASS, THE KRAYS). Now the film that Martin Scorsese calls, "One of the scariest movies ever made," finally comes to Blu-ray.

Academy Award winner Scott stars as a Manhattan composer consumed by grief after his wife and daughter are killed in a shocking accident. But when he moves to a secluded Victorian mansion, he will find himself haunted by a paranormal entity that may unleash an even more disturbing secret.

Trish Van Devere (THE HEARSE), two-time Oscar winner Melvyn Douglas (BEING THERE) and Jean Marsh (FRENZY) co-star in one of the most unsettling ghost stories ever made. THE CHANGELING was the winner of 8 Genie Awards, including Best Foreign Actor, Best Foreign Actress and Best Canadian Film, and is based on actual events.

Extras:
Severin's Standard and Limited Editions of THE CHANGELING have a street date of Tuesday, August 7th, and should cost you between $21 and $25! Boasting a new 4K transfer, the soundtrack CD, and a plethora of new extras, this is definitely a must-have release! Get your copy now from AMAZON, BULLMOOSE, or DIABOLIK DVD! You can also get THE CHANGELING directly from SEVERIN FILMS, either by itself or in a cool bundle that includes additional items! (e.g. an enamel pin, replica ball, and movie poster!)