After two really solid months of genre releases from Umbrella Entertainment, it seems as though they've reigned themselves in at the close of the Summer! While there are multiple new titles from this fantastic company, only two of them really fit into the Vault's wheelhouse this.

First up is the looooooooong-awaited Blu-ray of RAZORBACK, which has been released as part of Umbrella's Beyond Genres label. Boasting a new 4K transfer, a second cut of the film, and loads of extra features, this one is a definite must-own! Also worth mentioning is Umbrella's new DVD release of Jack Arnold's classic atom-age creature feature, TARANTULA, which features a cameo by a very young Clint Eastwood as a fighter pilot!

For further details on these two new Umbrella titles (and to see what else they've released this month) please continue reading Vault Dwellers!

ANNOUNCEMENTS:
* Umbrella's September slate is looking mighty fine! Here's what's coming on 09/05: CARGO, HEATHERS, THE IMMORTAL WARS, SPIRIT OF THE AIR - GREMLINS OF THE CLOUDS, and TO CATCH A KILLER!

* Umbrella delivers thrills new and old on October 3rd (just in time for Halloween!) with the highly-anticipated release of the long out of print Ozploitation classic, NEXT OF KIN, QUIJA HOUSE, and Region Free Blu-rays of HELLRAISER, HELLBOUND: HELLRAISER II, and HELLRAISER III! 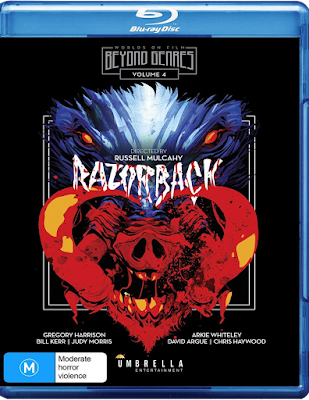 Synopsis: Somewhere deep in the Australian outback there's a marauding, indestructible creature that can rip a man in half and destroy a homestead in seconds.

This giant freak of nature is nine hundred pounds of tusk and muscle - and it is hell bent on terrorizing the small isolated community of "Gamulla" - a town as violent and primitive as the beast that threatens it.

ORDER RAZORBACK ON BLU-RAY TODAY FROM UMBRELLA ENTERTAINMENT OR AMAZON.COM! 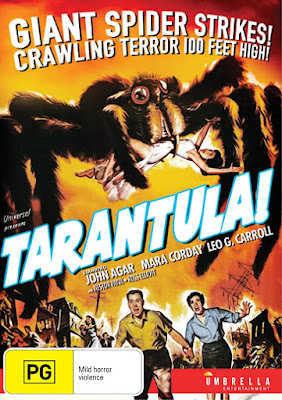 Ambitious Professor Gerald Deemer (Leo G. Carroll - NORTH BY NORTHWEST) has developed an astonishing new project: A special growth formula! Testing the formula on his innocent lab tarantula in Arizona he expects nothing more than it to double in size. But when it somehow escapes into the desert , it grows to gargantuan size and threatens to destroy everything and everyone in its path.

Also featuring John Agar (STAR IN THE DUST, THE MOLE PEOPLE) and Mara Corday (MAN WITHOUT A STAR) TARANTULA is a cracking example of 50s sci-fi horror paranoia in the glorious tradition of THE BLOB and THEM!

ORDER TARANTULA ON DVD FROM UMBRELLA ENTERTAINMENT OR AMAZON.COM!

Posted by The Vault Master at 1:16 AM