Scream Factory Gives You a Triple-Dose of John Carpenter Goodness on Blu-ray! 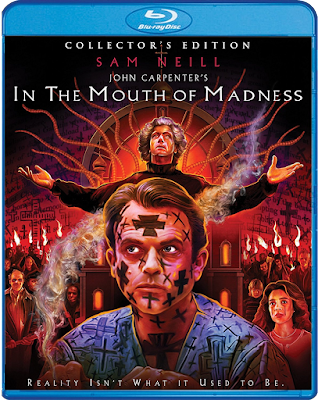 To date, Scream Factory has released the following John Carpenter films to Blu-ray: HALLOWEEN (and its sequels), THE FOG, ASSAULT ON PRECINCT 13, ESCAPE FROM NEW YORK, THEY LIVE, PRINCE OF DARKNESS, THE THING, and VILLAGE OF THE DAMNED. They also have a Collector's Edition of STARMAN coming to Blu-ray later this year, and have released Carpenter's ELVIS under their Shout Select label.

Now, with the release of three more Carpenter films to Blu-ray, Scream Factory need only get their hands on DARK STAR, CHRISTINE (coming soon to 4K UHD from Sony Pictures), BIG TROUBLE IN LITTLE CHINA, ESCAPE FROM L.A., VAMPIRES, GHOSTS OF MARS, and THE WARD. And that's just the films that John Carpenter has directed....

In any case, I'm jumping the gun because let's take a minute to focus on Scream Factory's latest Carpenter entries into their ever-expanding catalog.

Synopsis: Sutter Cane (Jürgen Prochnow - DUNE, THE SEVENTH SIGN) is the best-selling author whose newest novel is literally driving readers insane. When he inexplicably vanishes, his publisher (Charlton Heston - SOYLENT GREEN, PLANET OF THE APES) sends special investigator John Trent (Sam Neill - JURASSIC PARK, DAYBREAKERS, DEAD CALM) to track him down. Drawn to a town that exists only in Cane's books, Trent crosses the barrier between fact and fiction and enters a terrifying world from which there is no escape.

Inspired by the tales of H.P. Lovecraft, this shocking story is, in the words of its acclaimed director, "horror beyond description!"

Extras:
Scream Factory's IN THE MOUTH OF MADNESS Blu-ray blows away the previous release, and is currently available wherever Blu-rays are sold for approximately $22 - $25. Order yourself a copy of (what is arguably) one of Carpenter's best films now from AMAZON, BULLMOOSE, DIABOLIK DVD, or directly from SHOUT! FACTORY. 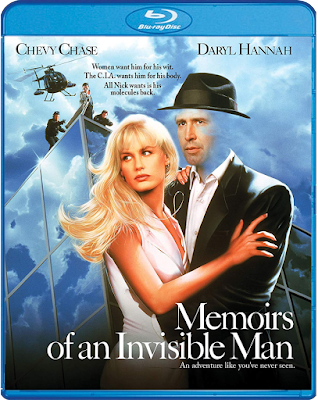 Synopsis: Just a quick nap and weary stock analyst Nick Halloway is sure he'll emerge as good as new. Instead, he wakes up as good as gone. Vanished. A nuclear accident has made Nick ... invisible!

The laughs and visual effects are out of sight when Chevy Chase (NATION LAMPOON'S VACATION films, CADDYSHACK) headlines MEMOIRS OF AN INVISIBLE MAN. Invisibility makes it easier to spy on agents (particularly chief adversary Sam Neill) who've put him in his predicament.

Extras:
MEMOIRS OF AN INVISIBLE MAN is also now available to purchase, and should cost between $20 - $24! Get your copy now from AMAZON, BULLMOOSE, DIABOLIK DVD, or directly from SHOUT! FACTORY. 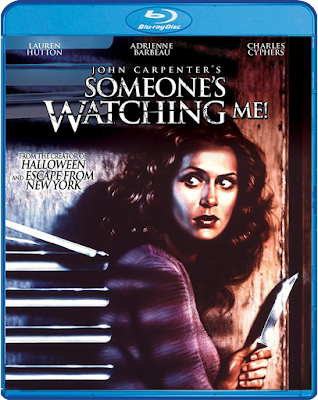 Synopsis: Los Angeles newcomer Leigh Michaels moves into a chic high-rise apartment building. She loves the view. So does the Peeping Tom who lives somewhere in the adjacent tower.

John Carpenter writes and directs this thriller where the breath-catching suspense starts at the moment Leigh (Lauren Hutton - AMERICAN GIGOLO, ONCE BITTEN) is framed in the lens of a telescope. For Leigh, it's the beginning of terrors that escalate from anonymous calls and gifts to lights that mysteriously flicker to prove that someone watches every moment of her life.

Leigh fights back, matching her tormentor's obsession with her own relentless drive to uncover his identity. The prey is now predator – and that escalates the stalker's game to a deadly new level. Someone is watching.

Extras:
Carpenter's oft-overlooked made-for-TV thriller gets the royal treatment from Scream Factory, and will be released on Tuesday, August 7th! You can order yourself a copy now (which retails for $20 - $24) from AMAZON, BULLMOOSE, DIABOLIK DVD, or directly from SHOUT! FACTORY.