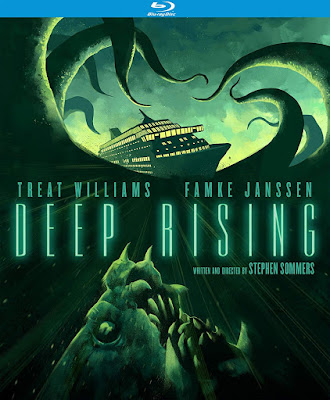 DEEP RISING is a film that I've always had a soft spot for Vault Dwellers. Directed by Stephen Sommers (THE MUMMY, THE MUMMY RETURNS), this movie features tough-as-nail mercenaries trapped on a huge luxury liner that has been invaded by a truly unique sea monster. The effects still hold up surprisingly well, and the movie has a stellar cast, plus a soundtrack by Jerry Goldsmith. This is a Grade-A Hollywood B-Movie, and I'm so happy that Kino Lorber gave this monster flick the love it so truly deserves!

Synopsis: Buckle up for edge-of-your-seat excitement with the explosive hit DEEP RISING! A band of ruthless hijackers seize the most luxurious cruise in the world only to find that all the passengers have mysteriously disappeared, but they are not alone. Something terrifying is lurking just out of sight – behind every deck and passageway: a deadly force from the unexplored depths of the ocean that begins to snatch the horrified intruders one by one!

Treat Williams (PRINCE OF THE CITY, THE PHANTOM) and sexy Famke Janssen (THE X-MEN TRILOGY) lead a group of survivors who must overcome incredible odds in their breathtaking battle to escape the doomed ship alive. Written and directed by Stephen Sommers (THE MUMMY, VAN HELSING) and featuring a stellar cast that includes Anthony Heald (THE SILENCE OF THE LAMBS), Kevin J. O’Connor (COLOR OF NIGHT), Wes Studi (THE LAST OF THE MOHICANS), Jason Flemyng (LOCK, STOCK, AND TWO SMOKING BARRELS), Cliff Curtis (LIVE FREE OR DIE HARD), and Djimon Hounsou (AMISTAD).


Extras:
Kino Lorber's 20th Anniversary Special Edition of DEEP RISING is now available wherever discs are sold! Until this movie makes the official leap to 4K, this is absolutely the definitive edition of this amazingly fun movie! DEEP RISING should cost between $18 - $20, and can easily be obtained from AMAZON, BULLMOOSE, or DIABOLIK DVD!