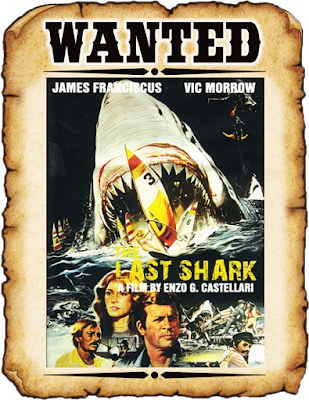 UPDATE (09/06/2019): Rumors of a possible Blu-ray release of this title from Severin Films were the result of a miscommunication in a recent Shock Waves podcast.

Also just learned today that Universal Pictures owns the rights to THE LAST SHARK lock, stock, & barrel. And so, the wait for a legit release continues....

THE LAST SHARK (aka GREAT WHITE, aka L'ULTIMO SQUALO) never got a chance to be fully embraced here in the U.S. Released briefly in the Summer of 1982, THE LAST SHARK was quickly pulled from theatrical distribution after turning a profit being deemed too derivative of JAWS.

And as we get closer to its 40th anniversary, I strongly feel that the time is right to lift Universal's ban on THE LAST SHARK so that it can finally find an audience! And what better way to reintroduce this lost film to a new generation than to give it a Blu-ray release that features a new HD restoration and oodles of extras about the making of the film, its infamous legal battle with Universal Pictures, and the growing cult following THE LAST SHARK has generated since then!

Synopsis: A Great White Shark stakes a claim off the coast of Port Harbor, and threatens the annual regatta and the reelection of Mayor William Wells. After maiming and devouring several victims, author Peter Benchley err... Benton (James Franciscus - THE VALLEY OF GWANGI) and shark hunter Ron Hamer (Vic Morrow - HUMANOIDS FROM THE DEEP) go after the finned fiend, leading to an explosive climax!


Availability: For a film that's been banned, it is remarkably easy to see THE LAST SHARK these days. You can watch it on YouTube or Amazon Instant Video (with Rifftrax Commentary even!), and there are several cheap DVDs floating around the web (like THIS ONE and THIS ONE) though their legitimacy is questionable. The only (allegedly) legit DVD release was back in 2015 from now defunct label called RetroVision Entertainment who put out a limited run of 500 copies. They announced that they were going to bring THE LAST SHARK to Blu-ray about a year later, but it never materialized.

Current Rights Holder: THE LAST SHARK was distributed by Edward L. Montoro's Film Ventures International (henceforth FVI), a company that produced and released multiple cult and exploitation favorites like GRIZZLY, THE DARK, PIECES, VIGILANTE, HOUSE ON SORORITY ROW, MUTANT, and others. The lawsuit with Universal unfortunately helped sink FVI and during the bankruptcy proceedings that followed, Montoro took a million bucks and vanished. But who has the rights now? The short answer: Damned if I know!

In 1984 FVI was purchased by the INI Entertainment Group which is no longer an active corporate entity. However, former INI President Irv Holender started a new company called Multicom Entertainment Group Inc. in 2010, which has a large library of films including the vast majority of FVI's titles. Though THE LAST SHARK isn't listed on their website, there's a slight possibility that Mr. Holender could retain some sort of say in distribution if the film's banned status were to change?

And if I was a betting man, I'd say Code Red DVD, Scorpion Releasing, Kino Lorber, or possibly even  Grindhouse Releasing would have dibs on the film if it got a legit North American Blu-ray release!

UPDATE: Universal owns THE LAST SHARK. This was told to me by Hudson Horror Show's Chris Alo a while, but officially confirmed today by David Gregory from Severin Films. If you want this to get a Region A Blu-ray release here in North America, then you best start hammering Universal on social media with polite requests, pleas, and/or demands!

Blu-ray Wishlist:
Though I own RetroVision's out of print DVD, and have even seen a 35mm print of THE LAST SHARK (thanks to Exhumed Films!), it would be supremely awesome to own this lost piece of cinematic history on Blu-ray disc! While I don't have high hopes, Scream Factory's recent Blu-ray releases of SCREAM FOR HELP and PROPHECY have proven that we should never say never!