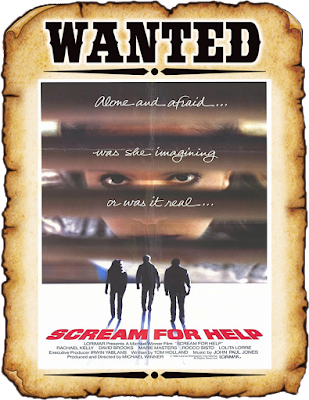 In October of 2016, at the behest of my friends Chris Alo (of Hudson Horror Show fame) and the late James "Doc Terror" Harris, I attended my first Exhumed Film's 24-Hour Horrorthon! It was  awesomely insane to say the least!

I sat in the (sweltering) theater all day, pounding energy drinks, and successfully fought to stay awake through all fourteen feature films! And out of that amazing roster (mentioned HERE), one movie in particular took us all by complete surprise, and became the event's "crowd favorite." I'm speaking of course about Michael Winner's 1984 thriller, SCREAM FOR HELP!

Synopsis: Christie (Rachael Kelly) seems to live an idyllic life with her mother Karen (Marie Masters), and her stepfather Paul Fox (David Allen Brooks) in a beautiful house in New Rochelle, NY. But Christie has recently begun to suspect that her new dad has an insidious plan to murder her mother! And worse yet, no one seems to believe her!

After a series of deadly accidents, Christie begins sleuthing for evidence to prove that Paul is planning to commit uxoricide. Dragging a few friends along for the ride, she skips school to spy on her stepdad, which eventually leads to the discovery that he's having an affair, and in cahoots with some very shady characters. It all builds to a tense home invasion during the climax, where Christie has to use her wits to either escape and get help, or kill the intruders.


SCREAM FOR HELP's screenplay was penned by Tom Holland (FRIGHT NIGHT, CHILD'S PLAY), and directed by Michael Winner (DEATH WISH 1 - 3), who took some liberties with the script (much to Holland's chagrin). The film has the bizarre feel of a made-for-TV after school special, but contains a surprising amount of violence, nudity, and awkward teen sexuality. The end result is an outrageous crowd pleaser that is often both funny and sleazy.

Availability: As is the case with the vast majority of films mentioned in our WANTED ON BLU-RAY column, SCREAM FOR HELP is currently out of print. VHS copies are a little hard to find: There aren't any up for grabs on AMAZON at the moment (but you can obtain the film's soundtrack on CD, Vinyl, or Cassette!), and there only a handful of (mostly overpriced) copies on EBAY. Luckily, someone has uploaded a VHS-rip of the full film to YouTube! (You can also watch a much better copy HERE for $2.99.)

Current Rights Holder: After its theatrical run in July of 1984, SCREAM FOR HELP came to VHS in 1986 from Lorimar. Three years later, Warner Communications purchased Lorimar, who continued to produce films and television programs until 1993, when they were engulfed by Warner Bros. Television. Therefore, it comes as no surprise that SCREAM FOR HELP is currently owned by Warner Bros. Entertainment, and hopefully a future candidate for the Warner Archive Collection!

SCREAM FOR HELP has built up a large cult following over the years, and is long overdue for a new home video release! If you're a fan of the film (or just super curious about it) then we must work together to hound Warner Bros. on social media! Let's make some noise and tag the WB on Facebook and Twitter, and tell them that we want SCREAM FOR HELP ON BLU-RAY!